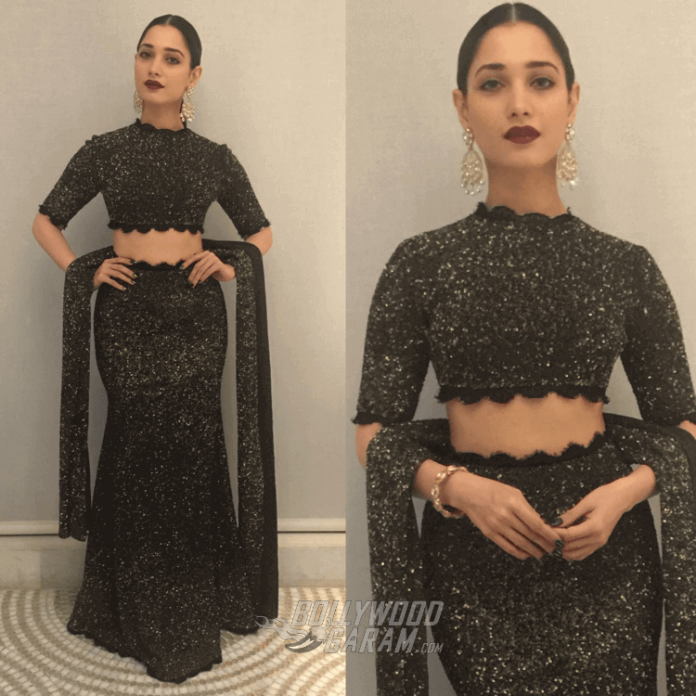 Gorgeous Tamannah Bhatia was snapped at the big fat Indian wedding of Subramaniam Reddy’s grandson Keshav and Veena’s wedding, held in Hyderabad on Sunday, January 29, 2017. The city was showered with celebrities who gathered around to bless the new couple and it’s safe to say that it was a star studded affair as Bollywood and Tollywood poured in, alike.

For the this special occasion the actress was spotted in a stunning outfit by Sunaina Khera. She was styled by Anisha Jain, her hair were styled by Madhuri Nakhale and she adorned designer accessories by Krysala Jewellery.

Tamannah Bhatia was accompanied by close friends and Tollywood Actress Kajal Agarwal at the wedding. The two looked absolutely beautiful!

As the two South Indian superstars posed for shutterbugs, they looked resplendent in black and white, like monochrome twins! They were dressed to the nines in designer wear and jewellery worth a lot of money. A lot of celebrities, industrialists and corporate bigwigs also attended the celebration and everyone was seen mingling together and having a good time, wishing the newly weds a happy married life.

Tamannah was last spotted at Mehboob Studio on January 19, 2017, as she did a photoshoot for Filmfare Magazine’s February edition.

Check out the exclusive gallery of Subbarami Reddy’s grandson Keshav’s wedding with Veena, attended by the likes of Amitabh and Jaya Bachchan, south superstars Rajnikanth, Chiranjeevi and Nagarjuna, to name a few.

Stay tuned for more updates on your favorite celebrities only on Bollywood Garam.