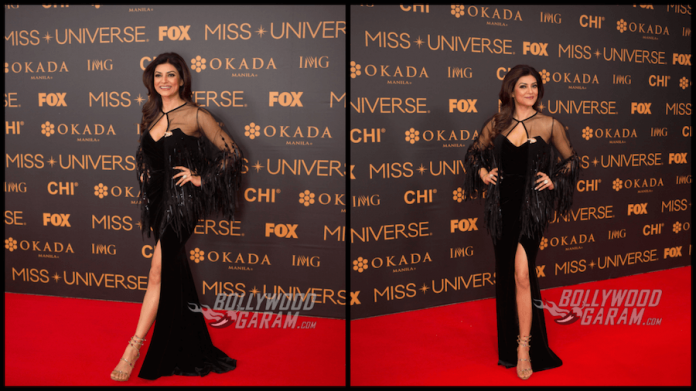 The bong beauty did India proud when she brought home the Miss Universe crown in 1994 and we’ve been in love with her since! She returned to Miss Universe 2016, as a judge, in Manila, Philippines on January 30, after 23 long years.

The beautiful model, actress and mother of two floored everyone with her looks!

For the red carpet before the main event, she wore a beautiful black floor-length gown with a mid-thigh slit, and paired it with a sheer black shrug.

This black gown of her’s stood out amongst all the judges and contestants and stole our hearts away!

A day prior to the main event, Sushmita even walked down the ramp one last time, and then took to instagram to share this emotional moment with her fans via a video. Check it out –

For you #India ??❤ post our #judge briefing today, got all my co judges (very sporting bunch)?❤? up on the #missuniverse2016 stage in #Manila to celebrate the #platform that will change someone’s life forever!!! bringing #glory to their #country as they proudly represent it!!!???❤ my co judges walked n danced too???(videos to follow)? And I..walked this stage one last time with YOU in my heart!!!! I celebrate you…I always will!!! THANK YOU INDIA!!!❤️??❤??? #missuniverse1994 ❤️❤️❤️❤️

Later, for the main event, she changed into a stunning gold-on-white gown and looked every bit like a coveted beauty pageant judge –

@sushmitasen #sushmitasen, the first #missuniverse I ever worked with doing hair at #MissUSA in #southpadreisland, texas! Amazing opportunity!

Getting ready with a dancing heart!!!!! ????❤️?I am soooooooo excited, emotional and looking forward to returning home to the #Philippines after #23years ???✈️❤ it’s where it all began #manila1994 #missuniverse1994 ????life comes a full circle, from winning Miss Universe, to having owned its Indian Franchise to now…returning back to #Manila this time as a #judge at the 65th Miss Universe pageant!!!?❤???????to all my #filipino friends who have been graciously asking…I can now confirm…yesssssss!!!! I am coming!!!?❤️???✈️? Mahal Kita Philippines ???❤️??see u sooooooon!!!!!?❤️?

Sushmita, who is also the owner of the Miss Universe Franchise in India, revealed in an interview what she looks for in Miss Universe 2016, as a judge on the panel –

“A 21st century woman who’s not apologetic about being beautiful. She takes pride in it, she inspires the world, and she does it by leading her life as an examples,” said Sushmita Sen, when asked about what she’s looking for in the next Miss Universe.

The 41 year old successful actress and model found these qualities in Miss France – Iris Mittenaere, who eventually won the pageant and was crowned Miss Universe 2016!

This year, India was represented by Roshmitha Harimurthy, however, she failed to make it to the Top 13.

Stay tuned for latest updates on the hottest events around town only on Bollywood Garam!