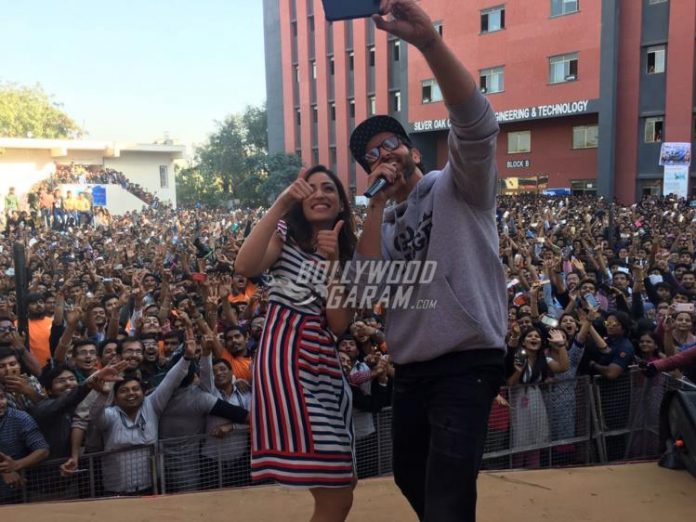 Hrithik Roshan and Yami amidst students for promotions

Hrithik Roshan and Yami Gautam starrer ‘Kaabil’ has hit the theatres and is running successfully all over. The movie has released but the makers have not stopped the promotions. Hrithik and Yami were at a college at Ahmedabad for promotions on January 31, 2017. The actors not just interacted with them but also sang, danced and took Boomerang videos.

Hrithik while interacting with his fans confessed about his love for Gujarati food and thanked all the students by saying, “Because of you, we are Kaabil. Without you, we are nothing. I really do not know what this magic is but I do know that I want to jump right now and give you all a very very big hug!” Thousands of students turned up to catch a glimpse of the actors.

‘Kaabil’ hit the theatres on January 25, 2017 alongside Shahrukh Khan starrer ‘Raees’. The makers of the movie are satisfied that both the movies are having a steady progress at the box office.

‘Kaabil’ is directed by Sanjay Gupta and is produced by Rakesh Roshan. The fresh pairing of Yami and Hrithik has been well accepted by the audience. The two are seen playing the role of a blind couple in love. Music for the movie has been composed by Rajesh Roshan and singer Jubin Nautiyal has sung three songs in the movie. The movie received good reviews mostly except a few who had a different opinion. The movie opened to 2700 screens while Shahrukh Khan’s ‘Raees’ opened in 3500 screens. ‘Kaabil’ also stars Ronit and Rohit Roy.