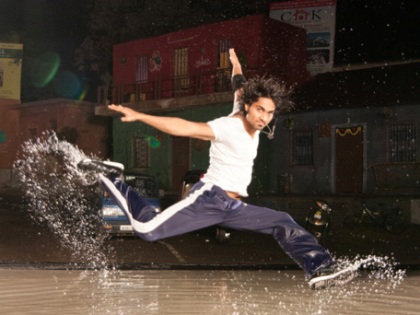 Dancer and actor Salman Yusuf fell from a height of 20 feet on December 16, 2012, while performing at an awards function in Mumbai. Yusuf was supposed to jump from a wooden plank which was week and broke when the dancer put weight on it. Salman  then fell and injured his legs and ribs just before his performance at the Big Star Entertainment Awards.

The actor will soon be seen playing the lead role in Remo D’Souza’s new movie ‘Anybody Can Dance’. At the awards show, he was supposed to jump off the plank and join director and actor Prabhu Deva on stage. However, the stunt went wrong and Salman fell and sustained injuries. The actor was immediately rushed to Kokilaben hospital in Mumbai.

Salman had come to the city to perform and was supposed to be home for his sister’s engagement in the next two days. His spokesperson informed the media that he had received injuries on his legs, knees and ribs but is out of danger.

Remo, the director of ABCD said that he has known Salman, the winner of first season of Dance India Dance and that he has always been prone to accidents. According to sources, the plank which gave way had also been replaced and nobody was to blame for the incident.