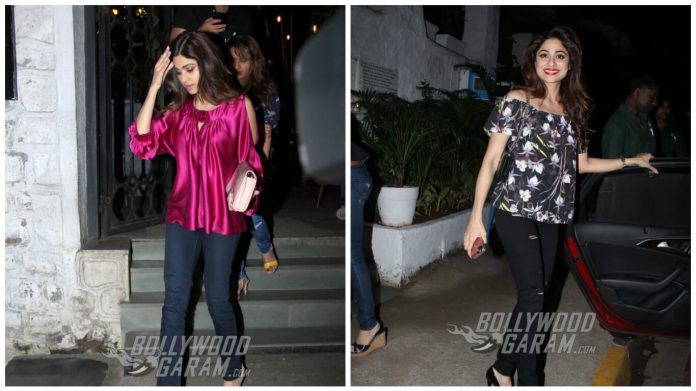 Shamita Shetty is known to be a social butterfly as she’s spotted quite often at social events and B-town parties. This time, we caught her dining out with close friends at popular restaurants around town, all through this week!

She was spotted at Korner House,Bandra, on February 7 and at Olive Restaurant the next day, on February 8, 2017.

Check out all the photos of Shamita Shetty right here –

Shamita also participated on the famous reality show – Bigg Boss Season 3 (2009) where Shamita was one of the thirteen contestants, and exited the show to attend sister Shilpa Shetty’s wedding to Industrialist Raj Kundra. She’s spotted quite often with Shilpa, Raj and their son four year old son Viaan on family outings and movies. Check out all the pictures right here.

She looked splendid in a purple top, paired with dark blue jeans and nude pumps. Her look was completed with the classic match-your-shoes-with-your-bag formula!

And here’s Shamita Shetty exiting Olive Retaurant with her girlfriends –

The very next day we spotted the diva wearing a black floral print top combined with black ripped jeans and black pointed heels. She left her tresses lose, which added panache to the complete look.

The actress has not been seen in Bollywood movies for quite some time now. The last Bollywood movie she was seen in was Harri Puttar (2008), which was directed by Lucky Kholi and Rajesh Bajaj. The former actress and model has turned to interior designing and runs a successful firm Golden Leaf Interiors.