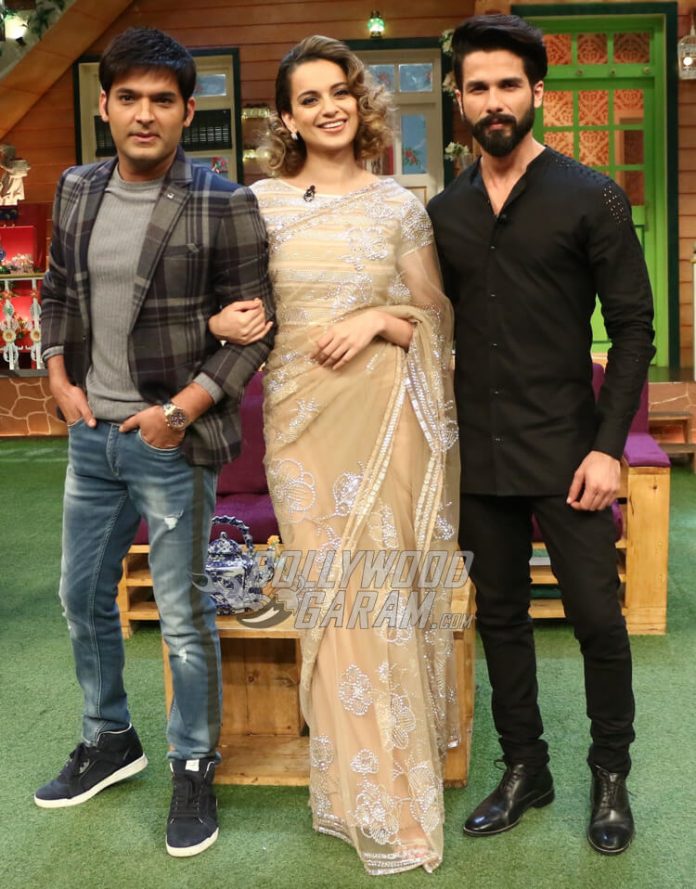 The cast of Rangoon Shahid Kapoor and Kangana Ranaut visited the sets of Kapil sharma Show for promoting there upcoming movie Rangoon.

Rangoon is an upcoming Indian drama film, directed by Vishal Bhardwaj and produced by Sajid Nadiadwala and Vaicom 18 Motion Pictures. The project is a period film set during World War II (1939-1945) and portrays the life and times of Mary Ann Evans aka Fearless Nadia, Bollywood’s first original stunt-woman still remembered for her fiery role in the movie Hunterwali. It stars Saif Ali Khan, Shahid Kapoor and Kangana Ranaut in lead roles. The film is scheduled for release on 24 February 2017.

Enjoy the exclusive gallery of the promotional episode of Rangoon Shot at the sets of Kapil Sharma Show:

Seems like Shahid and the king of shayari Sidhu Paji enjoyed a session of arm wrestling during the shoot.

Kangana looked splendid in a cream colored saree with silver and white embellishments and embroidery.

Famously Known for their extreme comedy, Palak And Guthi from the Kapil Sharma Show enjoyed dancing with Shahid and Kangana on a song from the movie Rangoon.

Here’s a picture of Shahid Kapoor and Kangana Ranaut playing a round of Ke Bhail Crore Pati on The Kapil Sharma Show. For those who aren’t aware of the show’s format, this part of the is a spoof on the Bhojpuri version of the famous game show – Kaun Banega Crorepati.

Episode of The Kapil Sharma Show featuring lead actors of Rangoon will air on Saturday, February 11, 2017 on Sony Entertainment Television. We hope you enjoy the show and the movie, which releases on February 24, 2017.