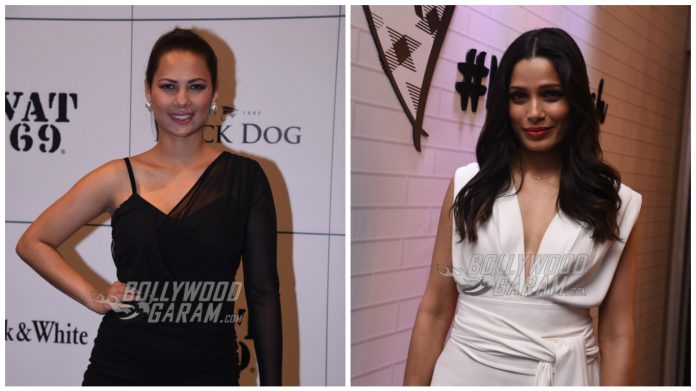 International Scotch day will be celebrated on Friday February 10, 2017 worldwide. The day invites people everywhere to raise a glass of Scotch to celebrate a drink that’s made to be enjoyed with good company, wherever and whenever. This day is celebrated in the Honour of Scotland’s gift to the world, to the spirit that has long drawn people in through its status and style.

Bollywood actress Freida Pinto has been chosen as a brand ambassador for promoting International Scotch Day 2017.

Enjoy the exclusive gallery of Freida Pinto and Miss India 2012 Rochelle Rao from the event held in Manila, Philippines on February –

On the work front, Freida Pinto has been on many Hollywood films. A couple of Movies in the year 2015 : Blunt Force Trauma and Knights Of Cups. Blunt Force Trauma is a 2015 Colombian English action film directed by Ken Sanzel and featuring Mickey Rourke, Freida Pinto and Ryan Kwanten in leading roles. Pinto plays a girl looking for her brother’s killer. The film is based on a banned shooting game.

Knight of Cups is a 2015 American experimental drama film written and directed by Terrence Malick and produced by Nicolas Gonda, Sarah Green and Ken Kao. The film features an ensemble cast, starring Christian Bale as the central character.

Rochelle Rao is an Indian Model and Anchor. She was crowned Femina Miss India International in 2012. She was featured in Kingfisher Calendar and various TV shows. She was a contestant on Bigg Boss Season 9 in 2015.

The international event has been sponsored by major scotch produced including Johnie Walker, Black Dog, Black and White and VAT 69 to name a few.