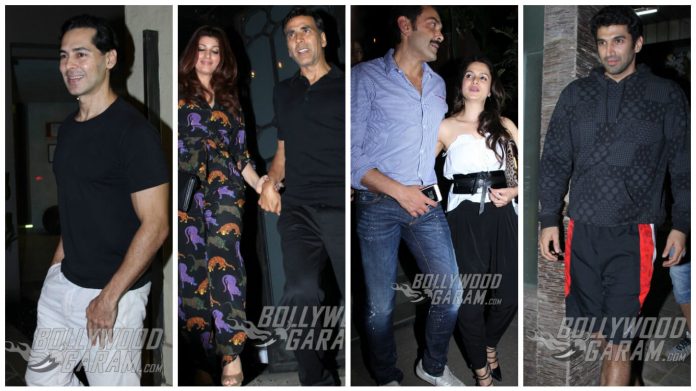 Check out the exclusive gallery from Valentine’s Day:

The suave actor was spotted in his ‘hood of Bandra and he happily smiled for the cameras while out and about on his own. He dressed casually for the occasion, with a black shirt and white pants.

The loved-up pair are #couplegoals for the rest of us mere mortals. Having been together for nearly two decades, they look like teenagers, still madly in love together. The actor was in an all-black ensemble, while his beautiful wife, who hasn’t aged since the day we first saw her on the big screen, was donned in a black dress. They spent a quiet time together, just the two of them minus their children, and enjoyed each other’s company.

The veteran actor looked happy being accompanied by his wife, Tania as they made their way around Bandra. They didn’t even mind the paparazzi around, and just enjoyed the day with each other.

The handsome actor has been dodging questions about his private life, but he appeared on Valentine’s Day with no arm candy in sight. However, he was accompanied by Mohit Suri, and they did look happy together! He smiled for the shutterbugs and was co-operative with questions posed by paparazzi.

Stay tuned for more updates on your favorite celebrities only on Bollywood Garam.