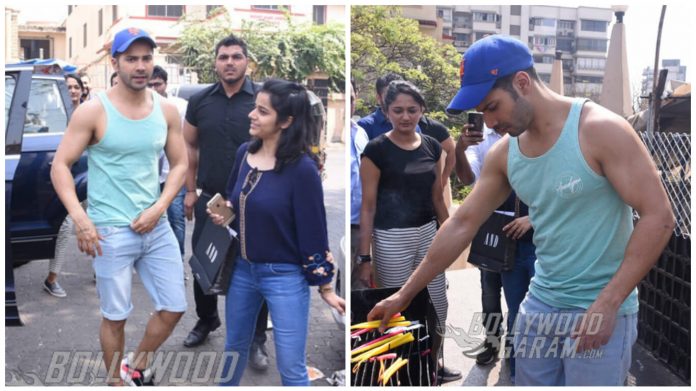 Personable actor of Bollywood Varun Dhawan was caught by paparazzi when he visited  Mt. Mary’s Church to pray on Valentines Day – February 14, 2017.

The actor and his co-star, Alia Bhatt were active yesterday and visited multiple locations in Mumbai, wrapping up the promotions of their latest release together, Badrinath Ki Dulhania.

He was snapped with his co-star of the upcoming movie Alia Bhatt for promoting their movie Badrinath Ki Dulhania Yesterday on Feb 14. They also dropped in to visit St. Catherine’s Orphanage, in Mumbai.

They both were also snapped Celebrating Valentine’s day together. The actors promoted their upcoming movie Badrinath Ki Dulhania at a special Valentine’s Day shoot. Maybe they were seeking the blessings of the Divine for their upcoming movie! The promotions have been in full swing, with veteran actress Madhuri Dixit helping to promote the remake of her song, Tamma Tamma by teaching Alia the moves. A couple of tracks released for the movie have already received rave reviews and it looks like this one is going to be a major hit with audiences, who have previously welcomed the pairing of Varun and Alia.

The movie is an romantic comedy film directed by Shashank Khaitan and produced by Karan Johar under the banner of Dharma Productions. The movie will release on March 10, 2017. Hope the fans enjoy these two together on screen after a great success of Humpty Sharma Ki Dulhania.

Check out the exclusive photos of Varun Dhawan praying at Mt. Mary’s Church –

Stay tuned for more updates on famous celebrities only on Bollywood Garam.