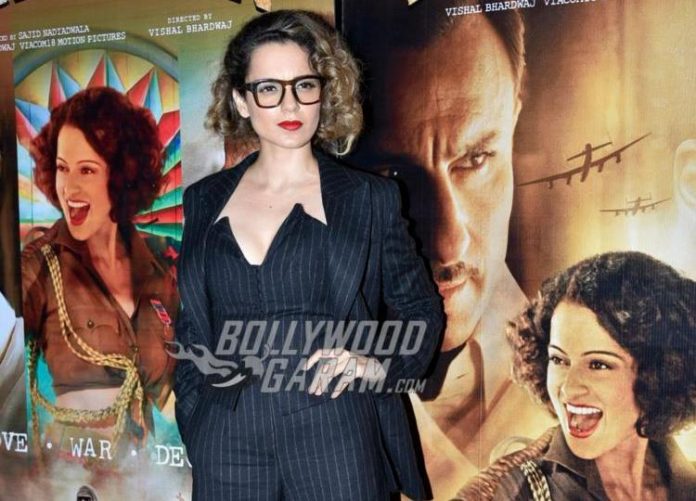 Makers of the movie ‘Rangoon’ hosted a special screening of the movie in Mumbai on February 21, 2017. Actors Kangana Ranaut, Randeep Hooda, Vikas Bahl and Vidhu Vinod Chopra were seen attending the screening.

Lead stars Saif Ali Khan and Shahid Kapoor could not turn up for the screening. The ‘Queen’ actress, known for her style sense, appeared in a trendy black suit, nude peep-toes and geeky specks. Randeep was seen in a casual t-shirt, jacket and jeans. Other attendees of the screening included Vidhu Vinod Chopra, R. Balki, Gauri Shinde, Anupama Chopra, Prasoon Joshi and Rakeysh Omprakash Mehra.

Kangana at the screening event interacted with the media and showed off some of her moves from the movie as she slipped in to her character of Miss Julia. The event was also attended by Sajid Nadiadwala’s wife Warda with her son. Filmmaker, Aanand L. Rai, behind the ‘Tanu Weds Manu’ series, was also a part of the screening.

The upcoming movie is a love triangle between Kangana, Shahid and Saif Ali Khan and is all set to hit the theatres on February 24, 2017. The war-drama is set in the backdrop of World War II and is expected to portray the life of Mary Ann Evans who was also known as Fearless Nadia. On the other hand Kangana in an earlier interview said that her character in the movie does not resemble any person living or dead. The movie is also in news for a steaming scene between Shahid and Kangana. The ‘Tanu Weds Manu’ actress in a recent interview talked about her experience of shooting for the intimate scene and said that she did the scene with Shahid with ease and did not have any struggles.