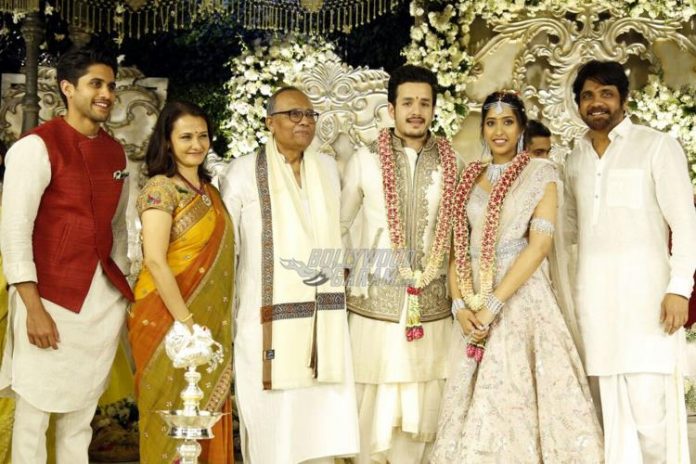 Telugu star Nagarjuna’s son, Akhil Akkineni’s wedding with Shriya Bhupal has been called off by their respective families. The two were expected to get married in a lavish destination wedding in Italy in May, 2017. More than 700 guests were expected to attend the grand wedding ceremony. The families of GVK Reddy and Nagarjuna’s families have requested the invited guests to cancel their flight tickets.
Sources close to the families have revealed that the families had sent out a message to the guests on February 18, 2017, requesting them to cancel their tickets but have not stated any reason. Those who were about to book, the tickets were advised not to go ahead. The tickets that were booked by both the families were also cancelled.
The recent reports have led to the speculation that Akhil and Shriya’s wedding has been called off. Reports have also said that everything was going smooth till last week after which the decision was taken to cancel. Akhil and Shriya got engaged in a grand ceremony in Hyderabad amidst friends and colleagues from the industry. The families of the two had jointly decided to have a grand destination wedding in Rome and had also started preparations for the same. The wedding cards were printed and sent out to the guests that included celebrities from Bollywood, Tamil, Malayalam, Kannada and Telugu, politicians and industrialists.
Shriya and Akhil dated each other for two years after which they decided to take their relationship to the next level and got engaged in Hyderabad in December, 2016. Shriya is a fashion designer by profession and is the daughter of industrialist GVK Reddy. The engagement ceremony was a grand event and was attended by the Who’s Who of Telugu movie industry, politicians and industrialists.