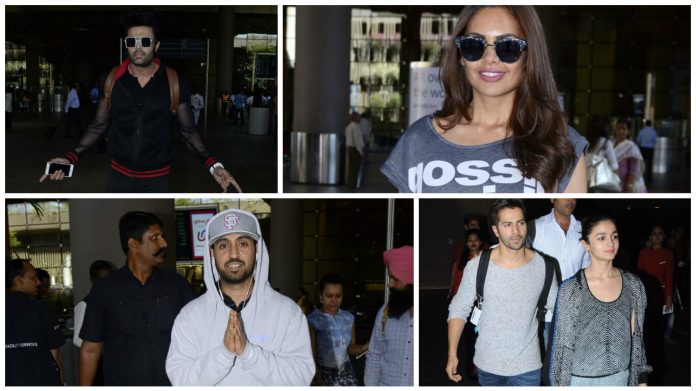 Bollywood Celebrities Jaya Bachchan, David Dhawan, Varun Dhawan with Alia Bhatt, Javed Akhtar with wife Shabana Azmi, Manish Paul, Esha Gupta and Diljit Dosanjh were all snapped by paparazzi with them close on their heels at the airport through this week.

The Bachchan matriarch was spotted in all white returning from an unknown destination.

The amazing couple looked quite exhausted, returning from a trip to an undisclosed location.

He may be jet-lagged, but he srill enjoyed posing for the shutterbugs!

The Bollywood producer and director was spotted at the airport, probably returning from a promotional tour with his son, who was also spotted the same day.

The gorgeous Jannat 2 actress Esha Gupta was looking Pretty as usual, when she was walking out from the airport.

Varun Dhawan And Alia Bhatt exiting from the airport. They were actively busy from promotions of their upcoming movie Badrinath Ki Dulhania dircted by Shashank khaitan and produced by Karan Johar under the banner of Dharma Productions. Its a second installment of a franchise that began with Humpty Sharma Ki Dulhania. The movie is scheduled to release on 11 March 2017.

Check out some more Images of Varun and Alia live as they return from Jaipur.

Stay tuned for more updates on the latest fashion trends favored by your favorite celebrities only on Bollywood Garam!