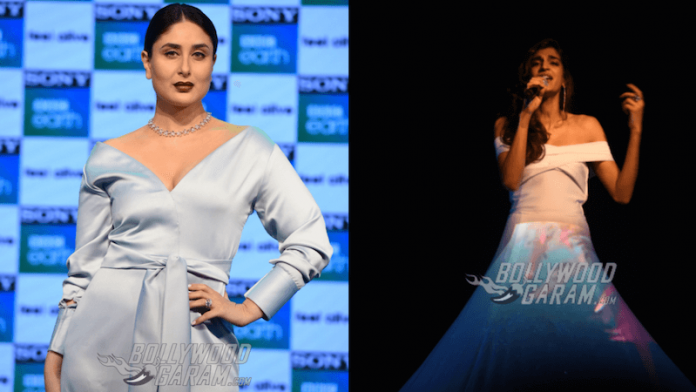 It was hell of an event as the historic collaboration between Sony Pictures Networks India and BBC Worldwide launched their television channel – Sony BBC Earth amidst great star power.

Starting from March 6, 2017, the channel will be available across India in 4 languages – Hindi, English, Tamil and Telugu. As you guessed it, programs on Sony BBC Earth will revolve around nature and will feature shows including naturalist Sir David Attenborough and other personalities like Steve Backshall, Ben Fogle and award-winning wildlife cameraman – Gordon Buchanan.

The event was graced by Bollywood diva Kareena Kapoor, who is the brand ambassador of Sony BBC Earth. The new mom looked stunning in a light grey satin dress, paired with a string of diamonds. Check it out –

Kareena Kapoor Khan spoke about her first experience witnessing Tigers and said that her son Taimur will definitely be watching the channel as he grows up as the channel’s stories convey so much positivity.

“I am into wildlife and nature, not many know this about me,” revealed, Kareena Kapoor.

She also revealed a little secret at the press conference – Kareena was four months pregnant when they shot for the channel’s lovely ad campaign! I bet you didn’t notice that.

Singing diva Anushka Manchanda performed solo at the event. It was a spectacular performance with interplay between music and graphics as images of nature and wild animals were projected over her dress.

Stay tuned for latest updates on your favorite television shows only on Bollywood Garam!