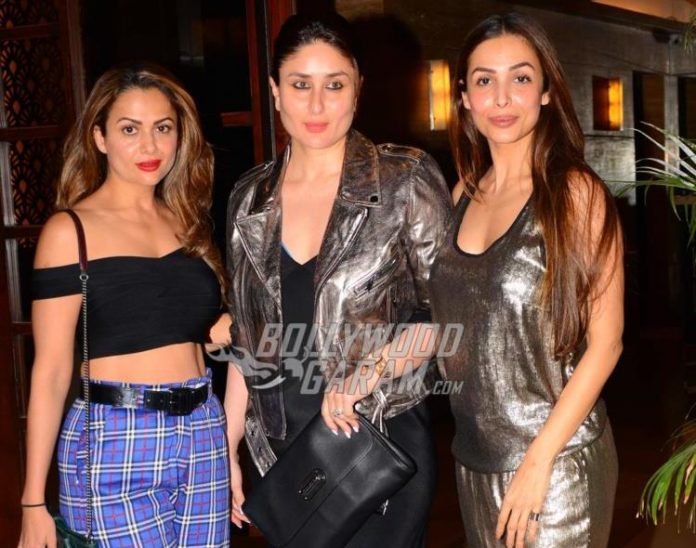 Bollywood divas Kareena Kapoor Khan, Amrita and Malaika Arora were snapped attending Seema Khan’s birthday bash in Mumbai on March 8, 2017. Sohail Khan’s wife turned a year older on March 9, but the celebrations began the night before. Close friends and family were invited at the grand birthday bash held at a trendy restaurant in the city.

The party also saw Kareena’s elder sister Karisma Kapoor, the birthday girl’s husband Sohail Khan, brother-in-law Arbaaz Khan and others. Seems like Kareena is on the way to shed her baby weight as the new mother is already looking fitter. The actress looked stunning in a black slip dress with a metallic jacket. Malaika, too dazzled in a metallic cord set with a pair of metallic joggers and a tank top.

Amrita looked stylish in a high waist chequered pants with a broad belt and a black off-shoulder crop top. The stunning ladies happily posed for the shutterbugs before they drove away in their cars. Karisma was seen arriving with her rumoured beau, Sandeep Toshniwal while Arbaaz was seen entering solo. The actor-turned-producer was seen in a casual white shirt and jeans.

On the work front, Kareena is jet set for her upcoming movie Veere Di Wedding and will soon begin shooting for it. The movie also stars Sonam Kapoor, Shikha Talsania and Swara Bhaskar. Veere Di Wedding was expected to go on floors in October 2016 but got delayed reportedly due to Kareena’s pregnancy. The movie is now expected to start shooting in April, 2017 and will be helmed by Shashank Ghosh.