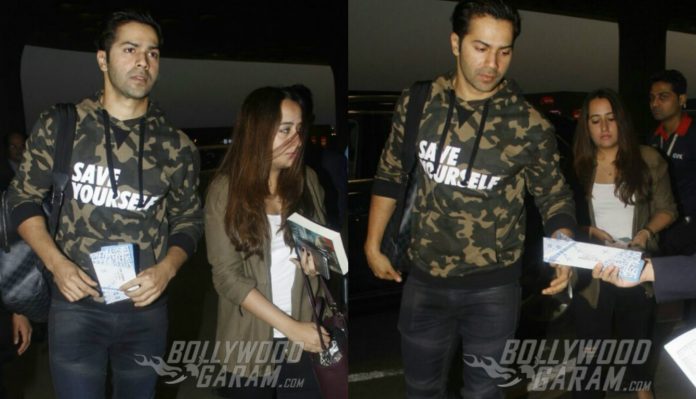 The rumors have been doing the rounds for a while now, but actor Varun Dhawan chose to keep his alleged relationship with Natasha Dalal under wraps. The two have been allegedly seeing each other for over 2 years and recently Varun Dhawan made their relationship officially public!

In an interview with Filmfare Magazine in February, Varun Dhawan was recorded saying that there’s nothing to hide, when asked about his rumored relationship with Natasha Dalal.

“I am cool about it. In fact, I’ve always been cool about it. There’s nothing to hide. I just don’t want the focus to shift from my career to the relationship. That’s why I don’t talk much about it.” – Varun Dhawan on him being secretive about his relationship with Natasha Dalal.

When asked about Natasha and their relationship, the actor said, “I see it (relationship) reaching a good place. She’s quite a handful, so full credit to her for sticking by me. She’s one of the best people I’ve come across in my life.”

However, the two are rarely spotted together at public places and parties. But we go lucky today as we spotted the cute couple arriving at Mumbai Airport, earlier this afternoon. Seems like Varun is a taking a quick break from tireless promotions of Badrinath Ki Dulhania with Natasha Dalal, before he moves on to his next project – Judwaa 2.

Judwaa 2 will be a project with father, Director David Dhawan as it’s a remake of the hit film, Judwaa. Jacqueline Fernandez will be starring in a lead role, opposite Varun Dhawan.

Recently, there have also been rumors of the two getting married soon, but it has neither been confirmed nor denied by Varun Dhawan.

Either-way, we are totally in love with the couple and would love nothing more than seeing them together for the rest of their lives.