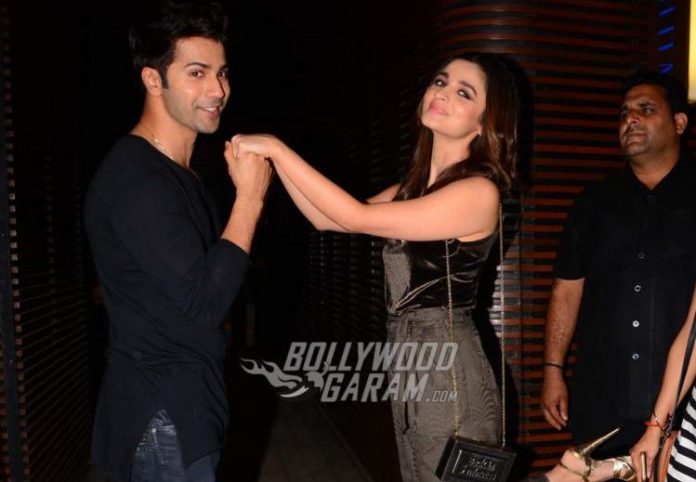 Makers of the movie Badrinath Ki Dulhania are on cloud nine with its success. The cast and crew celebrated the success of the movie with a celebratory bash in Mumbai on March 16, 2017. The attendees of the success bash included a number of Bollywood stars including Sonakshi Sinha, Kriti Sanon and Taapsee Pannu, among others.

Once again, Varun and Alia were seen together posing cutely for the photographers. Badrinath Ki Dulhania hit theatres on March 10, 2017 and is running successfully all over. Taapsee Pannu, at the success bash was seen in a pretty royal blue outfit while Kriti Sanon was seen in a light blue wide bottomed pants and a matching satin top. Badrinath Ki Dulhania’s Alia Bhatt looked trendy in casual pants and a velvet top. Co-star Varun looked dapper in a blue pants and a dark blue t-shirt.

Sonakshi Sinha looked gorgeous in a black pants and a black t-shirt and was all smiles for the shutterbugs. The actress is looking forward to her upcoming movie Noor which is due to hit theatres on April 21, 2017. Meanwhile, Badrinath Ki Dulhania has proved itself at the box office and is expected to do more business in future. Director Shashank Khaitan in a recent interview said that he would like to make another movie in the ‘Dulhania’ franchise, since the prequel Humpty Sharma Ki Dulhania also did well at the box office.