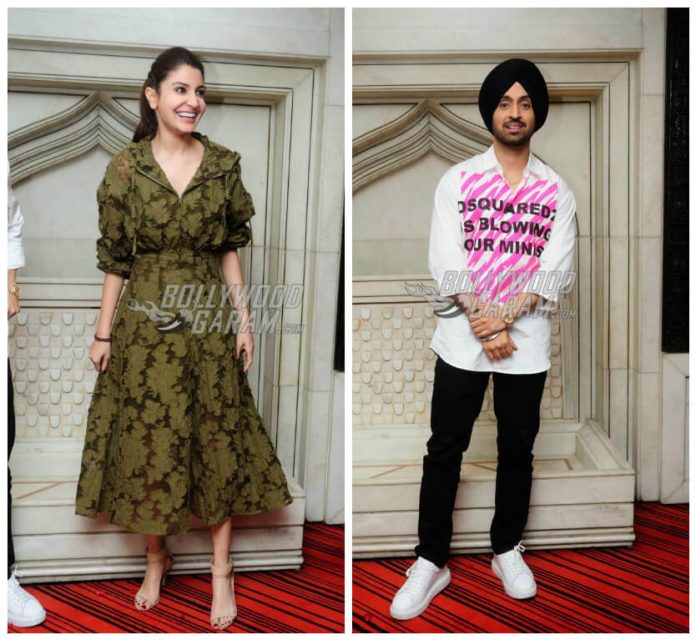 Anushka Sharma and Diljit Dosanjh are on a Phillauri promotional spree in Delhi!

Actors Anushka Sharma and Diljit Dosanjh reached Delhi for the promotions of their upcoming movie ‘Phillauri’ on March 21, 2017. Anushka, since the announcement of her upcoming production has been posting funny images of the friendly ghost Shashi, who visits various places and also became a part of various movies.

Fictitious Shashi could not be found anywhere, but Anushka and Diljit indeed made their presence felt at Phillauri promotions in Delhi. Anushka looked great in a dark green outfit by Rosie Assoulin, while Diljit appeared in a printed white shirt and black pants. The movie is directed by Anshai Lal and is all set to hit the theatres on March 24, 2017.

Anushka is currently busy promoting ‘Phillauri’ which is her second production venture and will later begin shooting for upcoming Sanjay Dutt’s biopic by Rajkumar Hirani. The actress will be seen playing an interesting role of a biographer, who writes down about Dutt’s life.

Anushka’s debut venture as producer ‘NH 10’ had proved itself successful at the box office. The movie was based on the controversial subject of honour killing in India. The upcoming movie will see Anushka play the role of a friendly ghost Shashi, who claims that she is married to the man, who got married to a tree. The movie also stars Suraj Sharma and Mehreen Pirzada. The makers of the movie have released the songs of the movie which have become popular among the listeners. Anushka was last seen in the movie ‘Ae Dil Hai Mushkil’ directed by Karan Johar and also starred Ranbir Kapoor and Aishwarya Rai.

Phillauri releases on March 24, 2017. Stay tuned for more updates from it’s promotions and an honest Bollywood Garam review of the movie!