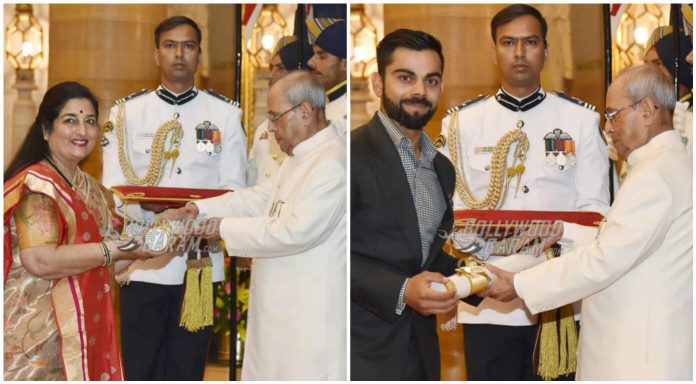 Indian cricketer Virat Kohli received the fourth highest civilian award, the Padma Shri from the hands of President Pranab Mukherjee at Rashtrapati Bhavan in Delhi on March 31, 2017. Virat Kohli and singer Anuradha Paudwal, were among the 39 people who were honored with the Padma Shri awards 2017.

The cricketer has shown some great form on the cricket field and has also helped the team towards success. Virat has also contributed towards taking the Indian cricket team to the number one position in test matches after taking over from captain Mahendra Singh Dhoni. The 28 year old cricketer also won the Player of the Tournament at the Twenty -Twenty Championship where the Indian team managed to reach the semi-finals.

What an absolute honour and a memorable day to receive the Padma Shri award from the president of india. These days last for a lifetime. Gods been kind ??. Jai hind ??????

Virat, even on an individual basis, was positioned in the top three batsmen in all the three formats. The cricketer expressed his happiness in a message through Instagram and wrote, “What an absolute honour and a memorable day to receive the Padma Shri award from the president of India. These days last for a lifetime. Gods been kind. Jai hind”.

On the other hand, singer Anuradha Paudwal, who is known for singing devotional songs, said that the Padma Shri is like a Prasad for the years of hard work she has put in. The 64 year old singer has also crooned Bollywood songs in many of the noteworthy movies like Aashiqui, Ram Lakhan, Saajan, Dil and others. Anuradha expressed, “I am very grateful. It is a wonderful honour to get from the Government of India. I have been singing devotional songs to Mata Rani for so long and I feel the honour is the prasad for all my hard work. I am extremely happy. It is a beautiful honour”. This year the government received 18,000 nominations out of which 4,000 were submitted online.

Other Padma Shri Awards 2017 winners include –

Former professor at the Massachusetts Institute of Technology Anant Agarwal