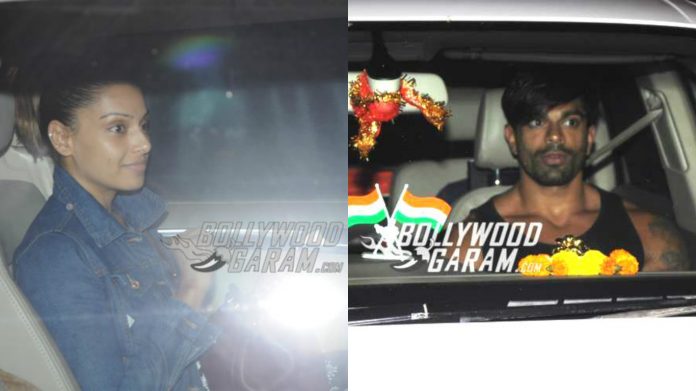 Bollywood actors Bipasha Basu and Karan Singh Grover were snapped driving home in Mumbai on March 31, 2017. Karan and Bipasha were seen in their car after a hard workout session at the gym.

Bipasha was recently in the news for rumours about her pregnancy. There were reports that the actress was expecting her first child with hubby Karan. However, the 38 year old actress took her Twitter account to clarify things and said, “The curiosity about me being pregnant…is sweet and a tad annoying. I am sorry to disappoint the people who are so eager for this to happen. We are not planning to have a baby right now.” The actress added that she would share the news when it actually happens.

The curiosity about me being pregnant…is sweet and a tad annoying. I am sorry to disappoint the ppl who are so eager for this to happen.

We are not planning to have a baby right now.When we do plan..it will be joyous news which we will share with our well wishers then.

It’s great to see the newly weds together. They like to spend a lot of private time together, but catching them in public really makes it a special treat for fans. They have already started working on a couple of ads together, and first met on the sets of their film Alone.

Bipasha Basu and Karan Singh Grover will be celebrating their first wedding anniversary this month, on April 30! As the saying goes, couples who gym together, stay together, and we wish them many more anniversaries to come!

Yesssss and there are days like this too…am only human !!! #loveyourself ??