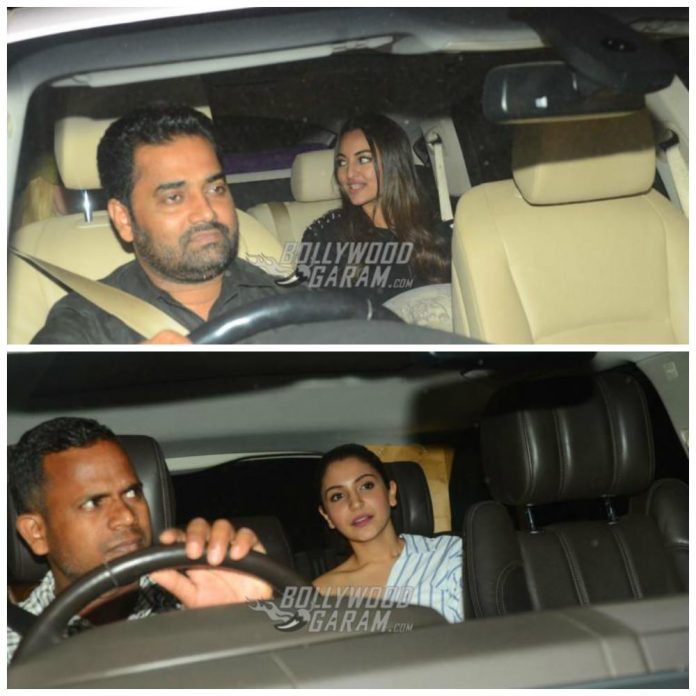 A number of top celebs from Bollywood were invited to attend a special screening of the Sonakshi Sinha starrer, Noor in Mumbai yesterday, April 19. Those in attendance were Anushka Sharma, Shahid Kapoor’s wife Mira Rajput, Puneet Malhotra and the star of the film herself, among others.

Sonakshi Sinha donned herself in an all-black outfit, while the rest of the gang kept it casual as well. Each arrived separately in their own chauffeur driven cars and dodged the waiting paparazzi, as usual.

High off the success of her film, Phillauri, Anushka Sharma was all smiles as she breezed past in a white off-shoulder outfit. The star took some time off her shoot for the upcoming project by Imtiaz Ali that also stars Shah Rukh Khan.

Noor is a light-hearted film about the daily struggles of a young, single woman in the city. In the film, Sonakshi Sinha plays the role of a journalist who has insecurities about her weight, professional and personal life. Noor is adapted from the bestselling book by Pakistani author, Saba Imtiaz called Karachi, You’re Killing Me! The tagline for the film is: “Your voices are important. Youth has the power to make a difference.”

The film also stars YouTube sensation and stand-up comedian, Kanan Gill in his debut Bollywood role. Other cast members include Purab Kohli and Shibani Dandekar, with Sunny Leone in a cameo role as herself. Noor is directed by Sunhil Sippy and releases tomorrow, April 21, 2017.

Sonakshi Sinha, in an earlier interview, talked about Noor and said, “Honestly, the films that I have done in the past have put me in a position that I can do roles like Noor today.”