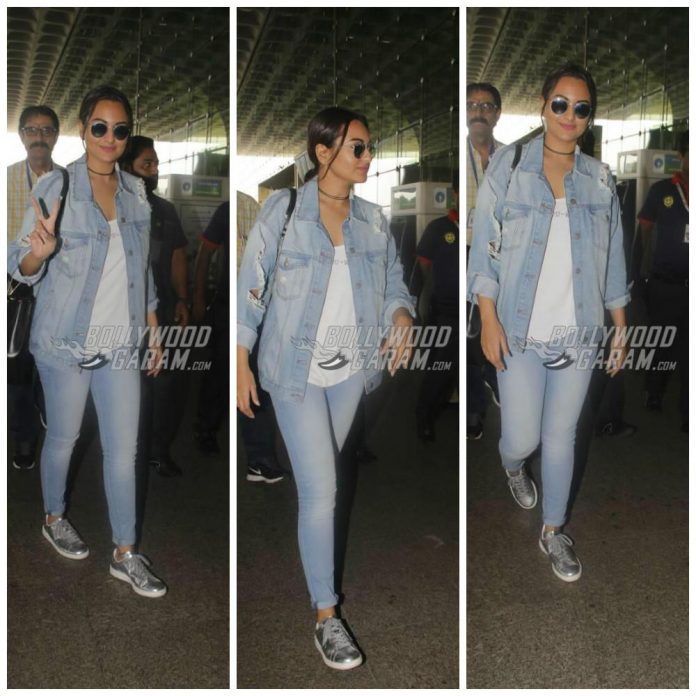 Sonakshi Sinha leaves for Auckland, where she will join Salman Khan for the Dabangg Tour

Actress Sonakshi Sinha has become one busy actress with promotions of Noor and has now left for the Dabangg Tour with Salman Khan in Auckland. The Akira actress was seen as she made her way through the airport. Sonakshi smiled for the cameras and looked great in skinny blue denims, a tank top and a denim jacket, accessorized with a thin choker and sunglasses.

The Dabangg Tour was kicked off on April 16 with a grand show in Hong Kong. Along with Salman Khan and Sonakshi Sinha, Akshay Kumar, Bipasha Basu, Nargis Fakhri, Daisy Shah, Elli AvRam and Manish Paul too performed at the concert. Salman Khan’s DaBangg Tour is also expected to be joined by Prabhudeva and Badshah. The DaBangg Tour next moves to Sydney and Melbourne over the weekend and will end with a grand finale on Sunday April 23.

Talking about Sonakshi Sinha, the actress is not just busy with Noor promotions, but is also shuttling between her role as a judge on the show Nach Baliye 8 and the Dabangg Tour. Noor will be released on the silver screens on April 21, 2017 and will see Sonakshi play the role of a journalist. The film is directed by Sunhil Sippy and is based on the Pakistani novel Karachi, You’re Killing Me! by Sama Imtiaz.