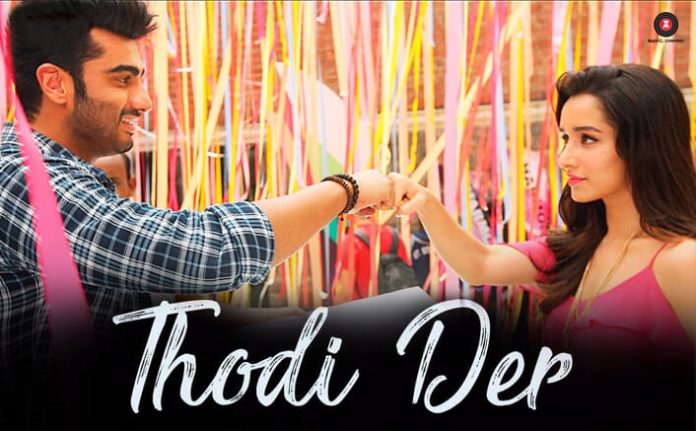 After Baarish and Phir Bhi Tumko Chahunga, makers have released the third song Thodi Der from Half Girlfriend

Makers of Half Girlfriend have released yet another romantic track Thodi Der. The song has been crooned by Shreya Ghoshal and Farhan Saeed and features Shraddha Kapoor and Arjun Kapoor. Thodi Der is composed by Farhad Saeed and is a recreated version of the album Tu Thodi Dair by the composer.

This is the third song released from the film after Baarish and Phir Bhi Tumko Chahunga, which are both romantic tracks as well.

Half Girlfriend – Dost se Zyada, Girlfriend se kam,is directed by Mohit Suri and is based on Chetan Bhagat’s best selling novel Half Girlfriend.The intense love story sets out to explore the grey area in relationships between two people.

The romantic drama flick also stars Vikrant Massey and Rhea Chakraborthy and will release in theatres on May 19, 2017. The story of Half Girlfriend is about a boy from Bihar, who falls in love with a Delhi Girl. Arjun will be seen playing the Bihari boy while Shraddha will be seen playing the Delhi girl. This will be the first time the audience will get to see Shraddha and Arjun sharing the screen space. The makers have shot the film across Bihar, Varanasi, Delhi, New York City and Cape Town.

See the official music video of Thodi Der from Half Girlfriend –