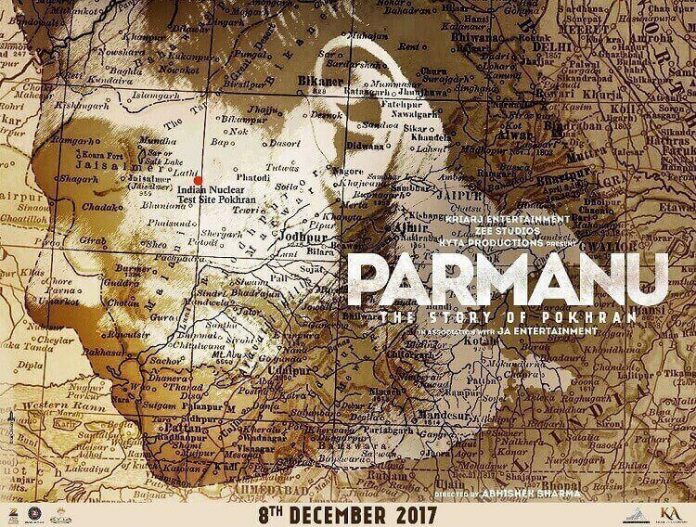 Bollywood bodybuilder, John Abraham released the first poster for his next film, Parmanu – The Story of Pokhran. The actor has recently started with his shooting schedule for the film. Directed by Abhishek Sharma, Parmanu is based on the successful nuclear tests administered in Pokhran, Rajasthan in 1998.

John shared the poster on Twitter and Instagram and captioned it as, “So happy to bring you the first look of my biggest test ever. #ParmanuFirstLook @johnabrahament @kriarj @ParmanuTheMovie.”

The poster looks intriguing with John’s face hiding as a disguise on the map of Pokhran.

In an interview with media, John says that “The road to Pokhran has been paved. It’s time to embark on a journey to revisit the mission that changed the place of India on the world map and turning the course of modern India’s position in the world as a strong nuclear state.”

He adds, “For us, this is not just a film. It’s a dedication from our side to all our soldiers of our country from all the forces. Also to all the scientists to dedicate their lives for the country.”

The film will be shot in Jaisalmer, Pokhran Fort, Aada Bazaar, Gandhi Chowk Main Market and a few other places.

The producer of Parmanu, Prernaa Arora, and Ajay Kapoor says that “We are just sharing their story with the world and we are very proud of it. It’s a film that every fellow Indian will surely be proud of.”

The film is written by John along with Saiwyn Quandros and Sanyukhta Chawla Sheikh. The music will be composed by Sachin-Jigar.

Produced by KriArj Entertainment and JA Entertainment, the film will also feature Diana Penty and Boman Irani in the lead roles. Parmanu is slated to release on December 8, 2017.

John Abraham’s Parmanu will clash with the sequel of Fukrey, Fukrey Returns.