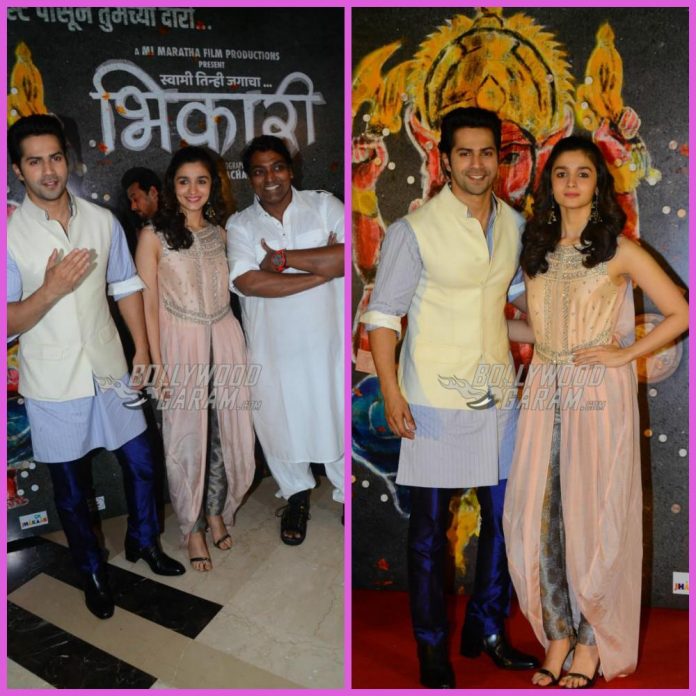 The cute Badrinath Ki Dulhania stars, Varun Dhawan and Alia Bhatt, once again came together to launch the music for friend and choreographer Ganesh Acharya’s directorial venture Bhikari. The actors had a great time during the launch event. Alia and Varun, who appeared in ethnic wear, lighted the inaugural lamp and had fun as they shook a leg on the songs from the flick.

The launch event also saw the presence of the lead star Swapnil Joshi and singer Sukhwinder Singh. Varun took his Twitter account and expressed, “Was an honour to launch the music for masterjis film #bhikari.” While Alia too took her Twitter account and wrote, “Such a pleasure to launch Masterji’s song today! A film that’s made from his heart.”

The upcoming film by Ganesh also stars Guru Thakur, Rucha Inamdar, Sayaji Shinde, Milind Shinde, Pradeep Kabra and Kirti Adarkar. The choreographer has earlier directed some of the Hindi movies including Money Hai Toh Honey Hai and Swami. The story of the upcoming film Bhikari revolves around the sensitive relationship between a mother and a son.

On the work front, Alia has been roped in for Meghna Gulzar’s Raazi and will also be seen in the upcoming films Dragon and Gully Boys. Varun Dhawan will be seen in the much awaited film Judwaa 2 which is the sequel to the blockbuster film Judwaa which starred Salman Khan in the lead role. The sequel will also see Taapsee Pannu and Jacqueline Fernandez step in to the shoes of Karisma Kapoor and Rambha. The film is expected to be released in theatres on September 29, 2017.