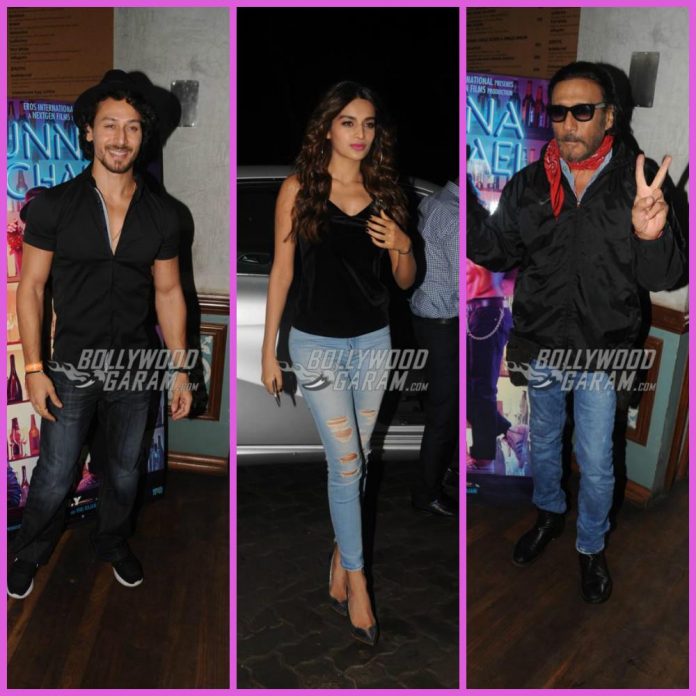 Cast and crew of Munna Michael gathered for a bash in Mumbai on June 26, 2017. The party saw lead actors Tiger Shroff, Nawazuddin Siddiqui, Nidhhi Agerwal, director Sabbir Khan and producer Viki Rajani in attendance. Tiger’s family Jackie Shroff, Ayesha Shroff and Krishna Shroff were all snapped at the party. Parents Jackie and Ayesha looked adorable together in co-ordinated outfits. The party also saw the presence of Meet Bros, who have created the film’s background score and music tracks.

Tiger looked dapper in a black shirt and a pair of denims while debutant Nidhhi was snapped in a black tank top and a pair of blue denims. Munna Michael is an upcoming dance film produced under the banner of Eros International.

The film will mark the Bollywood debut of Tollywood actress Nidhhi Agerwal and is the third collaboration between Tiger Shroff and director Sabbir Khan. The story of the movie is about an ardent fan of Michael Jackson played by Tiger Shroff, who has a the daunting task of teaching a gangster, played by Nawazuddin Siddiqui, to dance.

See exclusive photos from the Munna Michael wrap up bash –