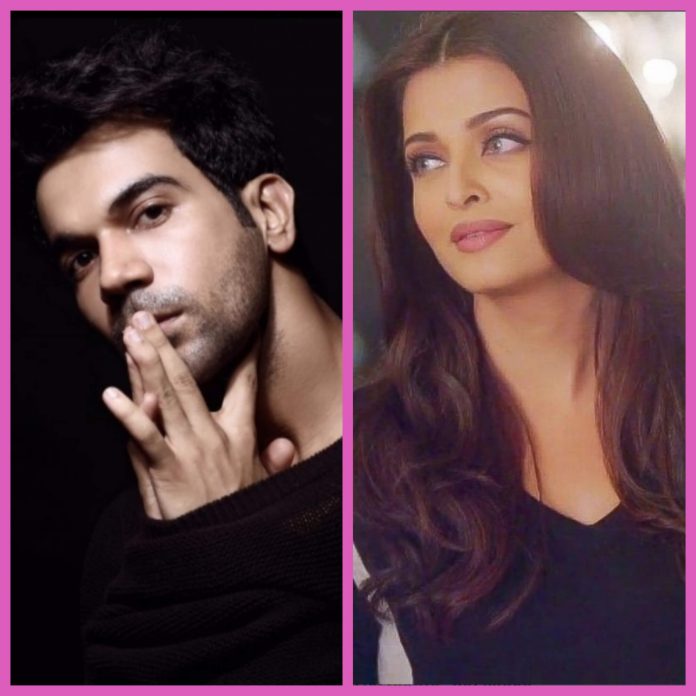 Fate seems to be smiling at National award winning actor Rajkummar Rao who recently won accolades for his performance for his recent release, Bareilly Ki Barfi starring alongside actor Ayushmann Khurana and actress Kriti Sanon. Rao will now be paired opposite former Miss World and B-town actress, Aishwarya Rai Bachchan for Rakeysh Omprakash Mehra’s next film along with co-producer Prernaa Arora and Arjun N Kapoor of KriArj Entertainment that also marks Atul Manjrekar’s directorial debut, a comedy musical, Fanney Khan. India Today in an earlier report said that the Hindi movie is an adaptation of the Dutch film, Everybody’s Famous! that released in the year 2000.

Actor Anil Kapoor plays the lead in this movie (Rao will be in the same film as Kapoor for the first time) and will come together with Aishwarya in a film after 18 years since their last movie together, Taal (1999) and actress Divya Dutta will also be a part of this film. Mehra welcomed the Shahid actor on board with his tweet:

Going by the reports, however, R Madhavan was Mehra’s first choice for the role that now Rao has been offered. Madhavan reportedly could not be a part of the film anymore and dropped out because of his busy schedule that involves working on several multi-lingual films and an upcoming intriguing web series called Breathe. He has been quoted saying in a statement, “I loved the script and was really keen to be part of an interesting ensemble like Fanney Khan, unfortunately I couldn’t commit to the project due to date issues. I wish the team of all the luck.”

What was Madhavan ‘s loss is Rao’s gain especially as senior Bachchan recently appreciated and applauded his role in Bareilly Ki Barfi with a handwritten letter and a bouquet and now he will be sharing screen space with the megastar’s daughter-in-law, Aishwarya.

When the legend sends you this handwritten note.. Thank you my dearest @SrBachchan sir. You’ve made my day. Much regards & charan sparsh ??? pic.twitter.com/G7vSfv9nfU

Meanwhile, a leading daily reported that Rao had been informed about this role on Tuesday, August 29, 2017, two days prior to his birthday on August 31 and he has been wanting to work with Arora as they “have been discussing films for a while.” The report also mentioned Rao’s adulation of Aishwarya, “She’s the most beautiful woman in the world” while stating that the movie is based on something “detailed and different” where “there is a lot of love”. He is reportedly looking forward to workshops and readings for the film, though he kept the details about his character in the film under wraps.

Rao’s performance has been acknowledged and acclaimed in several films like Kai Po Che!, Shahid, Queen and a biographical drama like Aligarh. While Kai Po Che! won him the Best Supporting Actor award, Shahid helped him bag the Best Actor and Critics Best Actor awards at Filmfare. He recently was awarded the Best Actor Award for his film, Trapped at the Melbourne Internal Film Festival that took place last month. Rao is currently filming Hansal Mehta’s Bose in Poland.

Arora, meanwhile has reportedly claimed that “Madhavan is one of the finest actors today” and she looks forward to “working with him in the future.” Speculations last month however indicated that the 43-year-old actress, Aishwarya was not in favour of being casted opposite Madhavan; she in fact wanted Rao to be on board. A leading news agency cleared the air when it quoted Mehra clarifying, “It is quite unfortunate that such false and baseless stories are created to grab attention. There is zero truth to that, we are all a team and Fanney Khan is a dear project to the whole team.”

As Mehra’s earlier statement in an interview goes, Fanney Khan will address body shaming issues and will go on floors on September 3.