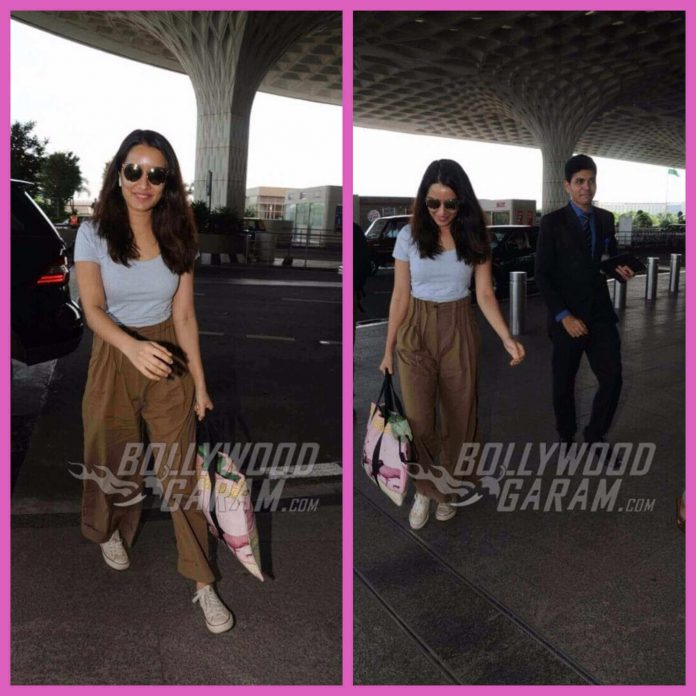 Shraddha Kapoor donned the casual look while leaving for Hyderabad

Bollywood actress Shraddha Kapoor who is now all set to star in a Telugu movie, Saaho opposite Baahubali actor Prabhas is headed to Hyderabad for the movie’s shooting and was spotted at the airport wearing a plain grey top with brown wide pants and comfortable sneakers with her hair open. Her vintage shades and big bag added the touch of pop and colour to her look.

Famous for her role in Aashiqui 2 (2013), the actress looked quite happy and excited to leave for the shoot after the recent promotions of her upcoming movie, Haseena Parkar at an event in Mumbai.

The Half Girlfriend actress also took to Twitter to show how excited and enthusiastic she is to be a part of the Saaho team.

Directed by Telugu filmmaker Sujeeth Reddy, Saaho, first movie pairing the B-town actress and Tollywood actor, will be released next year in Hindi, Tamil and Telugu. Both the actors have reportedly promised to help each other with their respective languages ahead of the film’s shooting as this is Shraddha’s debut Telugu movie and Prabhas’ debut Hindi movie. The report further stated, “It isn’t as though there won’t be an official language coach on the sets. There will be. Both Prabhas and Shraddha will have a professional tutor to help them with their language. But Prabhas and Shraddha will converse with each other in Hindi or Telugu depending on which language they are shooting in. It is a pact between them.”

Apart from the futuristic action movie, Saaho, Shraddha is looking forward to Apoorva Lakhia’s Haseena Parkar’s release on September 22 where she will play the lead, her brother Siddhanth Kapoor will essay the role of Dawood Ibrahim and Ankur Bhatia will star as Shraddha’s husband, Ibrahim Parkar in the film.