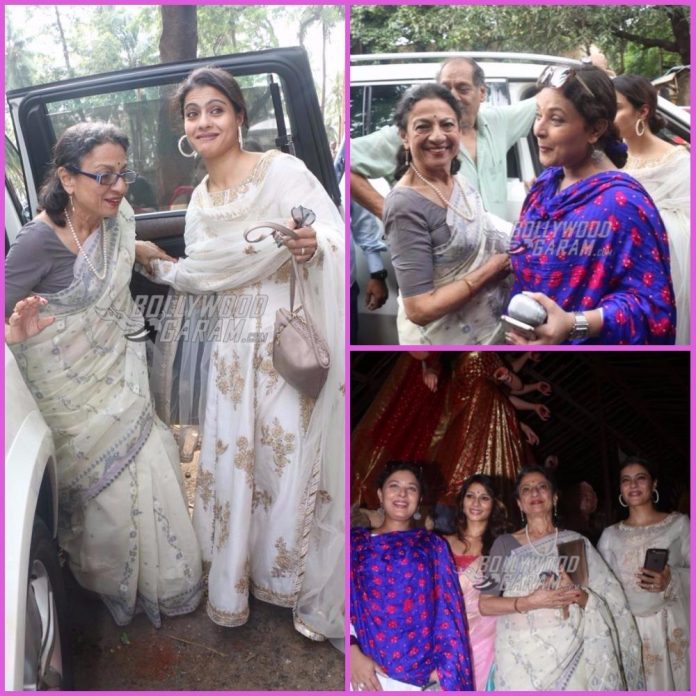 Kajol’s big comeback in Bollywood after her long career break post marriage and motherhood happened with the film, Dilwale opposite Shah Rukh Khan

The Navratri festival has begun and is the time for the celebrities to grab some blessings. Kajol with mother Tanuja, sister Tanisha and cousin Sharbani were snapped offering prayers at a venue in Mumbai on September 22, 2017. The Gupt actress looked pretty in a white ethnic outfit while mother Tanuja too appeared in a white sari.

Tanisha looked gorgeous in a pink sari while cousin Sharbani appeared in a white salwar and kurta with a blue dupatta. The Mujherjee family are often snapped worshipping during the Navratri festival.

On the work front, Kajol recently made a comeback to Tamil films with the film VIP 2 opposite Dhanush and was also seen in the film Dilwale opposite Shah Rukh Khan in 2015. Tanisha has not been much active in Bollywood in recent times and was last seen in the film Anna in 2016. The actress had also participated on the reality show Bigg Boss during the seventh season in 2013.

Exclusive photos of the Mukherjee family during Navrati festivals!