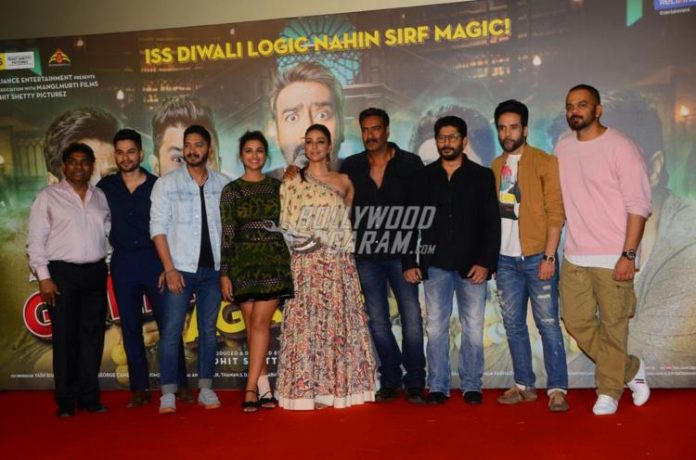 Golmaal Again is one of the most awaited films of 2017 and is ready to be released in theatres on October 20, 2017. After releasing the title track, the makers have dropped another track Maine Tujhko Dekha. The song has been recreated from the song Neend Churayi Meri from the Aamir Khan starrer film Ishq.

The video shows Ajay Devgn trying to woo Parineeti Chopra while others including Tusshar Kapoor, Arshad Warsi, Shreyas Talpade and Kunal Khemu helping him in the act. The entire track is an entertainer as the filmmaker Rohit Shetty has also attempted a Chaiyya Chaiyya sequence on a train.

The song is sung by Neeraj Shridhar and Sukriti Kakkar while the lyrics have been penned by Kumaar and Rahat Indori. The music has been composed by Amaal Mallik and Anu Malik. The upcoming Golmaal film will be the fourth installment in the franchise and has a few new entries apart from the old cast. Golmaal Again has Tabu, Parineeti Chopra and Neil Nitin Mukesh as the new entries in the cast.

The trailer of the Rohit Shetty-helmed film has already left the audience wanting for more. The film is surely going to be a blockbuster entertainer. Golmaal Again has a horror touch to it and Tabu will be seen playing the character of a ghost buster.