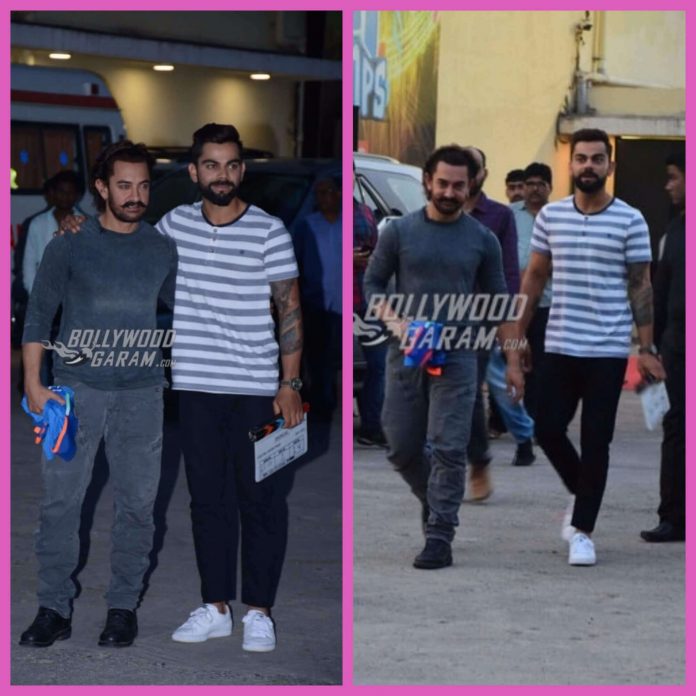 In a first, ace cricketer Virat Kohli and perfectionist Aamir Khan come together for a shoot presumably for the chat show that they will be seen together in during Diwali as part of Aamir’s upcoming film, Secret Superstar’s promotions. The skipper was seen wearing a striped t-shirt and black pants paired with sneakers while the Dangal actor was sporting his upcoming Thugs of Hindostan look while sporting a casual grey t-shirt, denims and shoes. He was seen carrying the Indian cricket team’s jersey and has recently returned from the upcoming film, Secret Superstar’s promotions in Singapore.

Meanwhile, Kohli too is on a break after winning the 5th ODI against Australia and is seen holding a clapboard on the shoot. The duo were snapped on their shoot in Malad, Mumbai for the Diwali special show on Tuesday, October 3, 2017. The show will reportedly be aired on Zee TV.

Fans of both the cricketer and the actor will have a special Diwali this year as they will witness the biggies talk about their lives, seemingly switch roles and even get candid about their personal lives while on the chat show.

It will be an enthralling watch as much as it will be entertaining with both asking each other some questions from their lives and both Bollywood and cricket fans can expect it to be a grand Diwali present considering the kind of stardom both Virat and Aamir enjoy in the country and the fact that both the celebs who have been tight-lipped about their lives will now come together to expectantly help each other spill some beans and make some interesting confessions as well.

The witty Aamir and humorous Virat who otherwise is not likely to talk about his personal life will be seen on the same platform and in an interesting get-together for the first time and it is expected that after this show, the audiences will be left wanting for more. Their pictures together are already spreading like wildfire on the internet:

Here are some exclusive photos from the shoot!

Aamir Khan’s Azad Khan was also snapped by the paparazzi at the shoot holding a cricket bat in his hand. Meanwhile, Secret Superstar is slated for a release during Diwali on October 19, 2017 and is jointly produced by Aamir and his wife Kiran Rao, scripted by Advait Chandan.

Watching these two superstars come together and reveal their secrets is an eagerly awaited event and an apt way for promoting the film, Secret Superstar. It’s certain to create wonders!