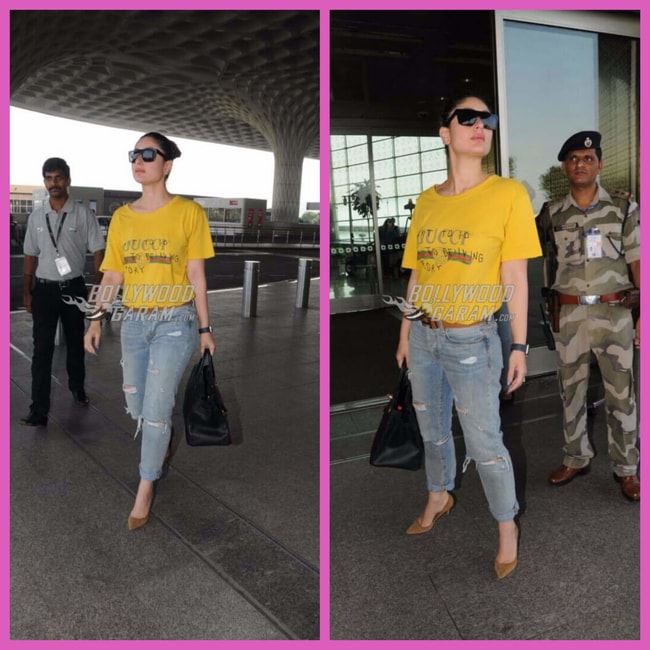 Bollywood’s glamorous heroine, Kareena Kapoor Khan has been having quite a busy week with her shooting for her upcoming film, Veere Di Wedding that can be called her comeback film post motherhood, and she was snapped on October 5 morning leaving for Dubai where she will reportedly be walking the ramp for designer Raghavendra Rathore in the royal collection.

The Jab We Met actress will be attending the fashion event and will also be a part of the launch of a new showroom of a jewelry brand that she has been seen endorsing.

Kareena was snapped at the airport this morning in a mustard yellow Gucci t-shirt with ripped jeans, a brown belt, camel-coloured pumps, a sporty watch and a black handbag. Fashionista that she is, how could she let her look be incomplete without a pair of stylish sunglasses?

The trendy and suave actress has been in the news off late as she was spotted at her husband, Saif Ali Khan’s upcoming movie, Chef’s special screening and attended her sister-in-law Soha Ali Khan’s birthday bash on October 4, 2017 with Saif and her little munchkin, Taimur Ali Khan who was seen twinning with his mom in a blue attire.

Her confident and stylish posing for the shutterbugs made for a bright day at the airport today morning and she was snapped looking vibrant, vivacious and geared up for her journey ahead.

The upcoming film, Veere Di Wedding is produced by Rhea Kapoor, Nikhil Dwivedi and Ekta Kapoor and helmed by Shashanka Ghosh. The film will be starring Sonam Kapoor and Swara Bhaskar in lead roles along with Kareena and is based on a story about four friends attending a wedding. When the film went on floors, Rhea posted a video on Instagram that showed Kareena getting ready for the shoot in her vanity van.

Kapoor Khaandaan’s fourth generation star, Kareena looks great and is ready to return to the silver screens with a bang! In a recent interview with a leading news agency, she was quoted saying about Veere Di Wedding’s shoot: “We will be finishing our Delhi schedule a few days before Diwali, so I will be spending time with my family. Work is a priority but family is very important to me.”

Exclusive photos of Kareena Kapoor Khan at the airport!