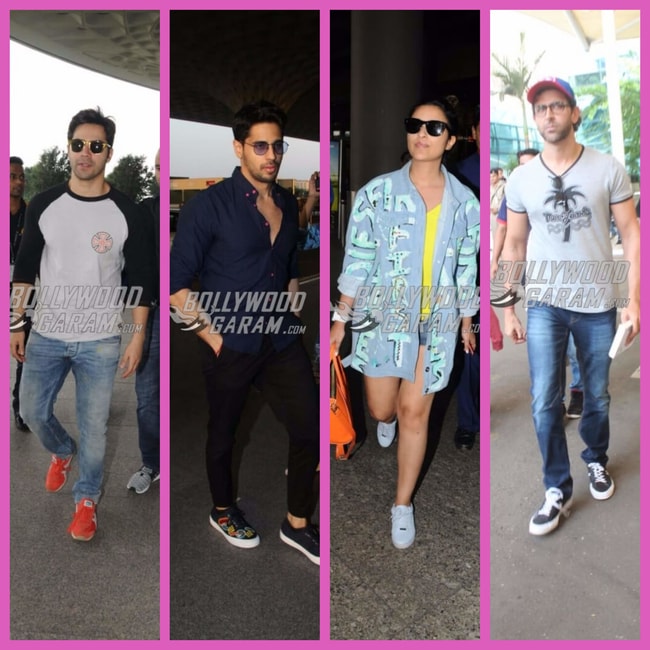 This week Mumbai Airport saw Bollywood celebrities flocking the place on their respective travel schedules as many were coming back from their vacation during the Diwali weekend while others were seen leaving for their work commitments.

Starting with Varun Dhawan who left for Delhi on October 21, 2017 in a casual outfit wearing a simple t-shirt with denims and colorfully-framed round sunglasses and orange sneakers; a day later, Sushant Singh Rajput was seen posing for selfies with fans in a black t-shirt, denims, a black cap, black glares and sneakers.

On families who returned from vacations in Goa were Kajol and Ajay Devgn with their kids, Nysa and Yug, and Hrithik Roshan and ex-wife Sussanne Khan with their sons Hrehaan and Hridhaan. While Kajol as seen in a black and white outfit with white-framed sunglasses reflecting the 70s look, Ajay Devgn was seen in a grey pullover, blue denims and brown shoes with reflective glares. Bespectacled Hrithik was seen in a printed t-shirt, denims and cap, true to the spirit of a holiday, while Sussanne too was spotted in a casual outfit in black tee and beige cargo pants and carried a handbag along.

Hrithik Roshan’s father and producer, Rakesh Roshan was also snapped at the airport in a yellow shirt and white pants as he carried a headphone and looked stylish in reflective glares. While Hrithik and family returned from Goa on October 23, 2017, Ajay Devgn and Kajol arrived at the airport on October 24, 2017.

October 24, 2017 was the busiest day this week at the airport as not only Ajay and Kajol but Kangana Ranaut, Yami Gautam and Parineeti Chopra were also snapped on their travel schedules the very same day.

Kangana was leaving for Jaipur when she was clicked by the paparazzi in a printed outfit and oversized spectacles. Yami, meanwhile, returned from Chandigarh with her sister and the siblings made stylish appearances. While Yami was wearing a black pullover and leggings with a black and white handbag and white sneakers, her sister, Surilie Gautam was seen wearing a black top, beige pants and black shoes along with black glares.

Parineeti, on the other hand, who returned from Goa post her 29th birthday celebrations was seen in a yellow tee, blue shorts and a long printed jacket with sneakers and an orange bag.

The next day, Anil Kapoor was seen making his way at the airport in a baby blue kurta, a nehru jacket, salt and pepper hairstyle, round sunglasses and faded blue denims while Karan Johar and Alia Bhatt looked ready to attend a concert as the duo returned from London. Karan was in an all-black ensemble along with a black trench coat, black t-shirt, velvet corduroy pants, black glares and dazzling golden sneakers. Alia, meanwhile, was seen in a camouflage long shirt with black jeggings and thigh-high black boots and reflective glares. She complete her look by tying her hair up in a bun and was seen hugging Karan before leaving in their respective cars. The director and actor duo will next be seen in Brahmastra directed by Ayan Mukherji with Ranbir Kapoor and Amitabh Bachchan playing pivotal roles in the film. Recent reports further suggest that TV star Mouni Roy will also join the film.