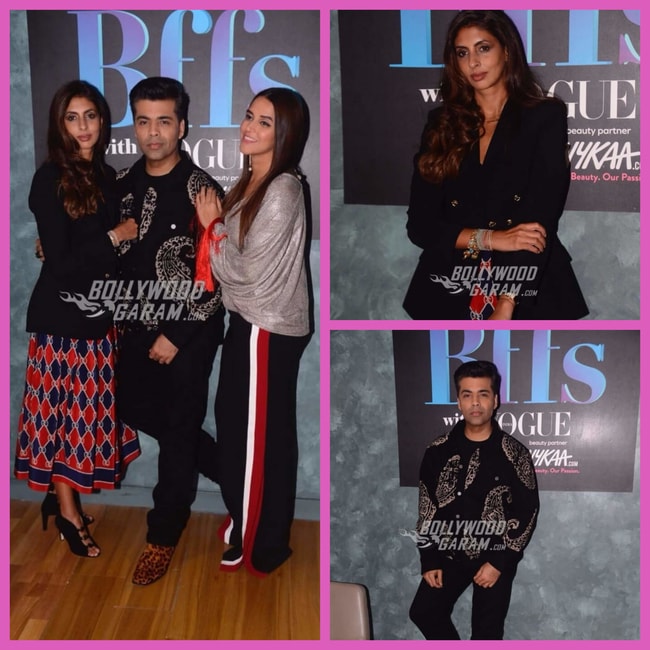 Neha Dhupia’s show, No Filter Neha did wonders in engaging the Bollywood celebrities in some candid and witty conversations about their lives. Now with the new show, Vogue BFFs, Neha is back in the game and it is none other than the famous talk show host, Karan Johar and his BFF, Shweta Bachchan Nanda who will be the guests for the second season of the show airing on Colors Infinity.

The episode with Karan and Shweta, Amitabh Bachchan’s daughter has already been shot and the three looked great as they were photographed together. While Karan was dressed in an all-black ensemble with n elegantly printed black jacket and animal print shoes, Shweta looked graceful in a black top, black blazer and a colorful printed skirt with black heels and a pretty little clutch on her wrist. Neha, on the other hand, sported a casual chic look in a shimmery loose-sleeved top and black wide-legged pants.

Recently, Neha was spotted with BFFs and sisters, Malaika and Amrita Arora and looked great in a mustard yellow dress with a black and silver belt and black heels.

Neha will next be seen in a comedy-drama film, Tumhari Sulu alongside Vidya Balan, Malishka Mendosa and Manav Kaul that is slated to release on November 17, 2017.

Karan too has his next production venture, Ittefaq releasing on November 3, 2017 directed by Abhay Chopra and starring Sidharth Malhotra, Akshaye Khanna and Sonakshi Sinha.