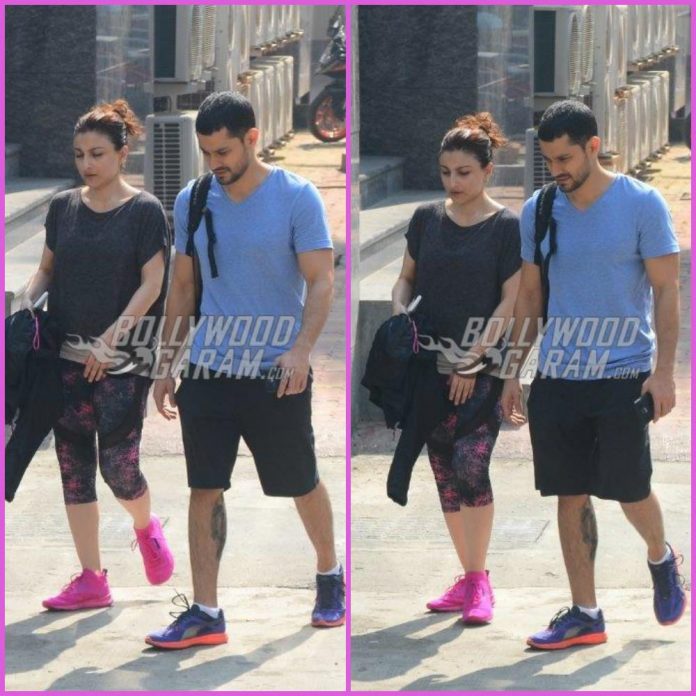 Bollywood couple, Soha Ali Khan and Kunal Kemmu are now parents to an adorable daughter, Inaaya Naumi Kemmu. Post maternity, the Ghayal Once Again actress has now got down to get back in shape. Soha and husband Kunal were snapped outside the gym in Mumbai on November 28, 2017.

The Golmaal Again actor was snapped in a blue t-shirt and black shorts while Soha was seen in a loose black t-shirt and printed tights with pink shoes. Soha has given birth to a baby girl on September 29, 2017 and Kunal shared a lovely picture of his daughter on his Instagram account.

The actress in a recent interview with a leading daily talked about motherhood and said, “The first week after leaving the hospital was terrifying. Earlier, you lived in joint families. Now it’s just Kunal and I at home. Of course, my mother came for some time and his parents also dropped by. Also his sister, my sister and sister-in-law dropped by.”

Kunal was last seen in the film, Golmaal Again, which became a huge success at the box office.

Exclusive photos of Kunal Kemmu and Soha Ali Khan outside the gym!