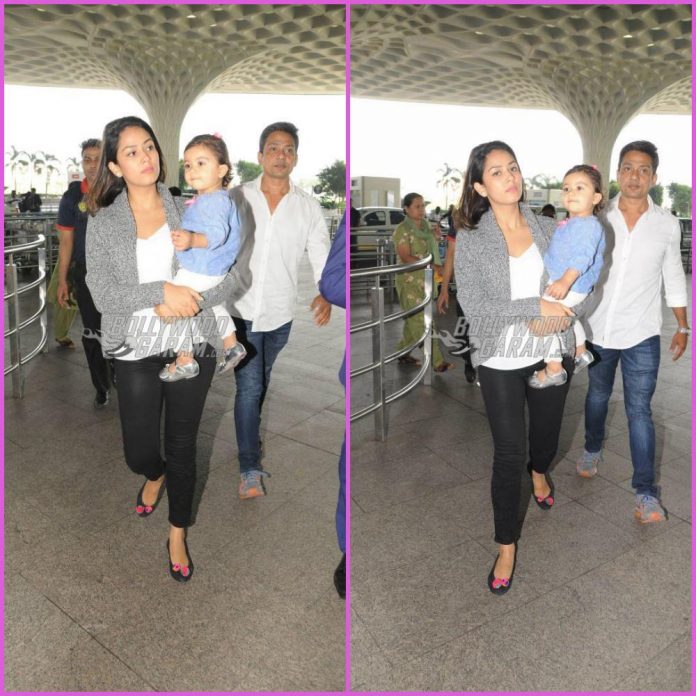 Shahid Kapoor’s wife, Mira Rajput with daughter Misha Kapoor was snapped at the airport in Mumbai on November 30, 2017. The mother and daughter duo were seen leaving for Amritsar. Mira is often seen traveling to Amritsar with daughter Misha.

The 23-year-old looked pretty in black jeans and grey jacket and a white t-shirt and completed her look with black pumps. The little one too looked pretty in a blue top and white pants with silver shoes. Going by the pictures, Misha surely enjoyed the attention by the paparazzi.

Shahid Kapoor is looking forward to his upcoming film, Padmavati, which was expected to  release on December 1, 2017 but has been delayed due to the ongoing controversy. The actor in a recent interview talked about his experience with Padmavati and said, “Honestly, in the last few years, I think most of the things I have been doing have been challenging, or have been firsts of some kind — Haider, Rangoon and Udta Punjab are all different from anything I’ve done before, so that’s something I’ve gotten used to. I don’t know if nervous is the right word.”

Upcoming film, Padmavati also stars Deepika Padukone and Ranveer Singh and is directed by Sanjay Leela Bhansali. Mira, in an interview, also talked about Shahid being a father and said, that his relationship with Misha began when he came to know that she was pregnant.

Exclusive photos of Mira Rajput with her daughter, Misha at the airport!