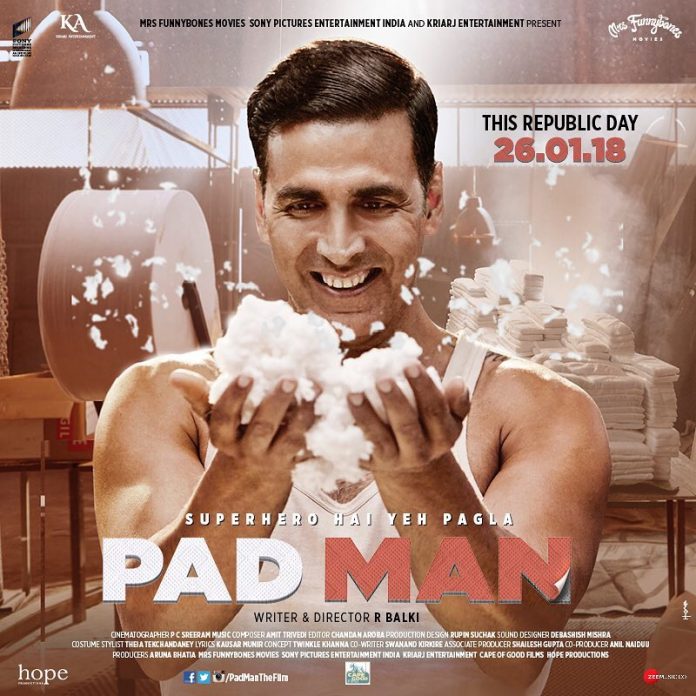 Akshay Kumar has constantly ventured playing new and challenging roles during his career. The actor will soon be seen playing the lead in the biopic of Arunachalam Muruganantham, the man who invented low-cost sanitary napkins for women in the rural areas. The film PadMan is directed by R. Balki and will mark the debut of Twinkle Khanna as a producer.

PadMan also stars Radhika Apte and Sonam Kapoor and the makers have released a new poster of the film. The new poster has Akshay at a workshop, while he smiles as he looks in to raw cotton. PadMan new poster was revealed by Akshay who wrote, “#PadManTalks: Mad only become famous! @PadManTheFilm @sonamakapoor @radhika_apte @mrsfunnybones @SonyPicsIndia @kriarj #RBalki.”

Akshay in the film will be helping to spread awareness about menstrual hygiene. The actor during an interview was asked about starring in a film that talks about menstruation and said, “If you change nothing, nothing will change. It’s not about being bold, but about breaking taboos that hold us back. I have lived with women all my life, yet I have learnt more about the topic while making this film than ever before. I do not mind who I offend or whose stomach I turn by being bold, this is not the Stone Age; menstruating is natural.”