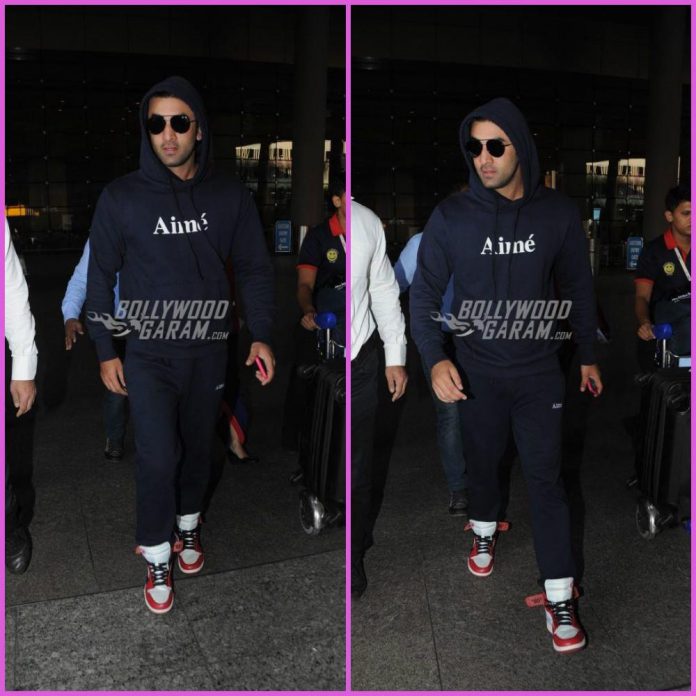 Fans of Ranbir Kapoor are eagerly waiting for the upcoming biopic on Sanjay Dutt. Ranbir Kapoor, who will be seen playing the lead role in the upcoming Sanjay Dutt biopic, was snapped at the Mumbai airport on December 13, 2017. The actor was shooting in South Africa and was seen returning from Dubai.

Ranbir for his airport look was seen in a dark blue hoodie sweatshirt, track pants and a black pair of sunglasses. The Barfi star made a very stylish exit from the airport and was all smiles for the shutterbugs. Some of the pictures from the sets of the Sanjay Dutt biopic had leaked on the internet and went viral.

The pictures showed Ranbir’s close resemblance to Sanjay posy his jail term. Ranbir during an interview shared, “Sanju Sir has been closely attached to the film. He has come on set and has been amazingly supportive. It used to be surreal for me because I am acting like him. He used to sit in front of the monitor and see some scenes and be so happy. He’s like an overgrown child, who gives love to people…I feel like I was born to play this part.”

Kapoor during the interview also shared that Sanjay is the only actor, whose picture is on his cupboard and is excited to play him on screen. The Jagga Jasoos actor added, “Getting a physical look right is easy. To get somebody’s soul right, the human being right- that’s the hard part. I hope I’ve done a good job”. The upcoming biographical drama is scheduled to be released on March 30, 2018.