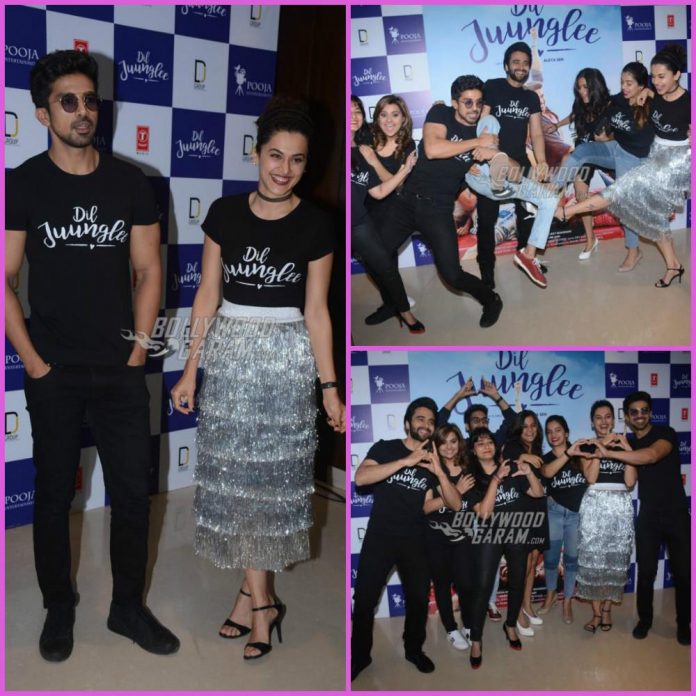 Cast and crew of Dil Juunglee had a fun time at the trailer launch event held in Mumbai on January 17, 2018. The trailer launch saw the presence of Taapsee Pannu, Saqib Saleem, Abhilash Thapiyal, Nidhi Singh, Sristi Srivastava and Jackky Bhagnani.

The makers earlier released a few posters of the film that showed some crackling chemistry between the lead stars Taapsee and Saqib. The trailer begins with the introduction of the two main characters, Saqib plays Sumit Uppal, the role of a gym trainer while Taapsee plays Koroli, the role of an English counselor. Koroli has a number of times faced heart breaks.

During the trailer launch, Taapsee was asked if she was focusing on commercial films after doing two comedy films back to back to which she said, “No, not really. After ‘Judwaa 2’ this is one film I am doing on a light-hearted subject before getting into my zone of power-packed performance. As long as I am enjoying this, and my audience is supporting, I am fine with balancing both kinds of cinema.”

The upcoming film is directed by Aleya Sen and produced by Jackky Bhagnani, Deepshikha Deshmukh and others. Jackky will be seen playing a cameo in the flick. The producer will be featuring in one of the songs sung by Guru Randhawa. The cast and crew looked great in black t-shirt with Dil Juunglee printed on them. The film is ready to be released in theatres on February 16, 2018.

Check out the trailer here: