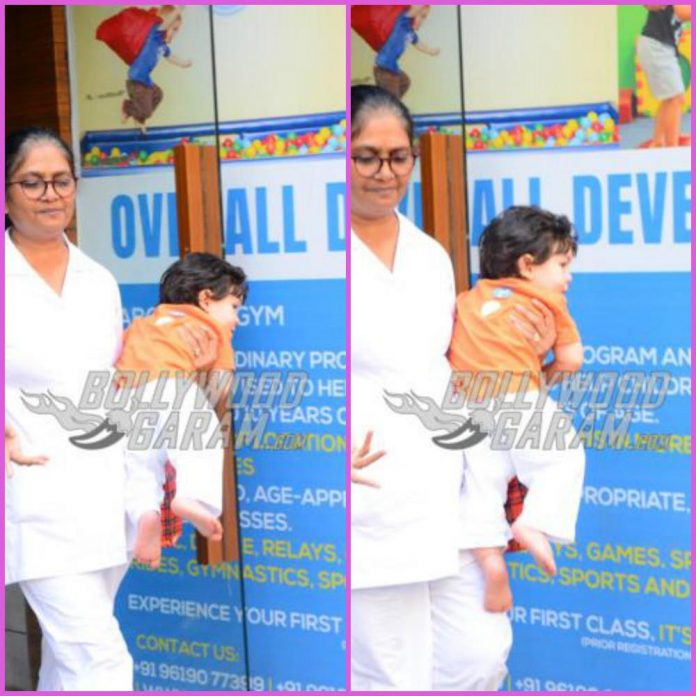 Saif Ali Khan and Kareena Kapoor’s son Taimur Ali Khan is now a year old and is already going to play school. The star kid is constantly followed by the paparazzi and his pictures soon become viral on the internet. Taimur was snapped with his nanny as he came out of the playschool in Mumbai on January 31, 2018.

The little munchkin looked adorable in an orange t-shirt and white pants as he was being carried by his nanny. Taimur is probably the youngest to have a huge fan following. Even his parents Kareena and Saif are fond of him and have often spoke about him in earlier interviews. Saif in an earlier interview said, “Taimur is rather delectable, so I don’t blame anyone. It’s a price he has to pay for it.” Mother Kareena too spoke about son Taimur and said, “My son is the gorgeous man on this side of the equator, in India technically.”

The Jab We Met actress also talked about the media glare on her son and said, “When I was pregnant, both Saif Ali Khan and I had spoken about this and how we’d handle it. He was like there’s nothing to hide. He’s our child and this is the way it’s going to be. He’s going to be photographed, so be it.” Kareena added, “It’s convenient for stars when they want to be clicked… like at events while putting on makeup, wearing an outfit… and so on. So why hide your child? We’re pretty open and clear about it”.

Kareena is often seen taking Taimur on the sets as she is back to work and working on her upcoming film Veere Di Wedding.