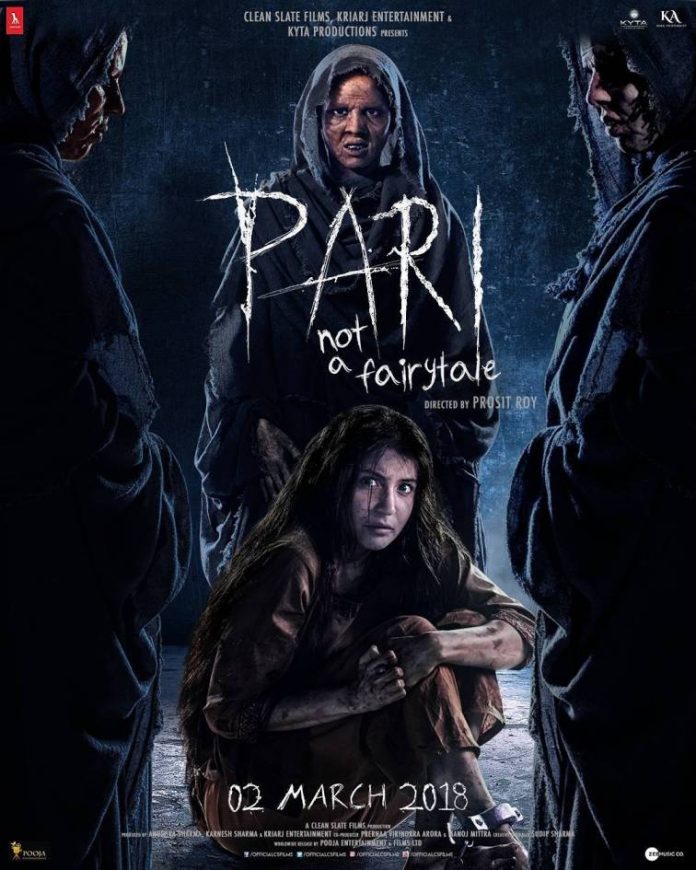 Actress turned producer Anushka Sharma took her Twitter account to unveil another spooky poster of her film Pari. The new poster is the scariest so far and has further increased the curiosity of the audience who love the horror genre.

The poster had the caption, “Here’s something more haunting than your #MondayBlues. #PariTrailerOnFeb15 @paramspeak @OfficialCSFilms @kriarj @poojafilms @KytaProductions.” Anushka in an earlier interview expressed, “We have gone by instinct in choosing good cinema, and the audiences have liked both our films. Pari is a strong, engaging story and our team is brilliant. It’s the kind of project that I love producing and delivering to audiences.” The new poster has shown Anushka dressed in rags and her leg is tied up in a chain. Behind her a witch can be seen dressed in black rags.

This is the first time Anushka as a producer has ventured in to the horror genre. Her previous film Phillauri was of a comedy genre, but failed to impress the audience. Anushka’s first film NH 10 was a thriller flick based on honor killing and did exceptionally well at the box office.

The upcoming film Pari is directed by Prosit Roy and also stars Parambrata Chatterjee and Rajat Kapoor in important roles. Parambrata in an earlier interview talked about the film and said, “The script of Pari worked for me immediately. Anushka is a brilliant actor and a superstar. Working on this film will be an enriching experience.” Pari is jointly produced by Clean Slate Films and KriArj Entertainment . Anupam Roy has composed the music for the flick. Anushka showed off the first look of the film in June 2017 and since then the makers have been dropping new posters and teasers to keep the interest of the audience intact. The actress is soon expected to begin promotions of the film. Pari is ready to be released in theatres on March 2, 2018.