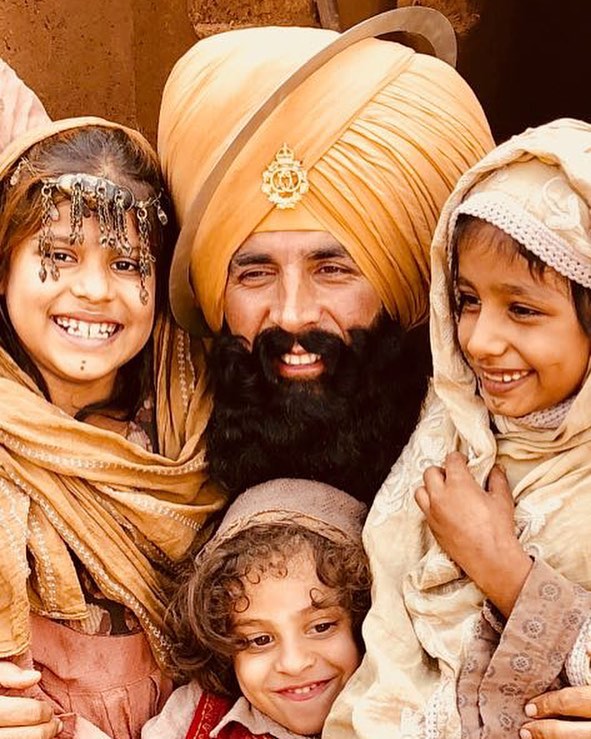 Akshay Kumar has always proved his acting skills by venturing into different types of roles. After spreading social messages with the films Padman and Toilet – Ek Prem Katha, the actor is now shooting for his upcoming film Kesari, based on the battle of Saragarhi.

Akshay will be seen playing the role of a military commander Havaldar Ishar Singh, of 21 Sikh soldiers , who fought against thousands of Afghani invaders. The first look of the film won the hearts of the audience with a heavy beard and a heavy turban. Another picture from the sets of Kesari was shared by the star on the social media.

The new picture has shown Akshay posing with little children. The picture was posted by Akshay on his Instagram page with the caption, “Innocent smiles galore on set today! Shooting with these lovely children playing Afghani kids in #Kesari based on the Battle Of Saragarhi, one of the bravest battles fought in India.”

The film Kesari is based on the battle of Saragarhi. Akshay in a recent interview talked about the title Kesari and said, “It is not that I will do only this kind of film. I am doing a war film called Kesari, it is for the first time that I am doing a war film, it is new for me. So I am very excited about it.” The film is due to be released in theatres in 2019.