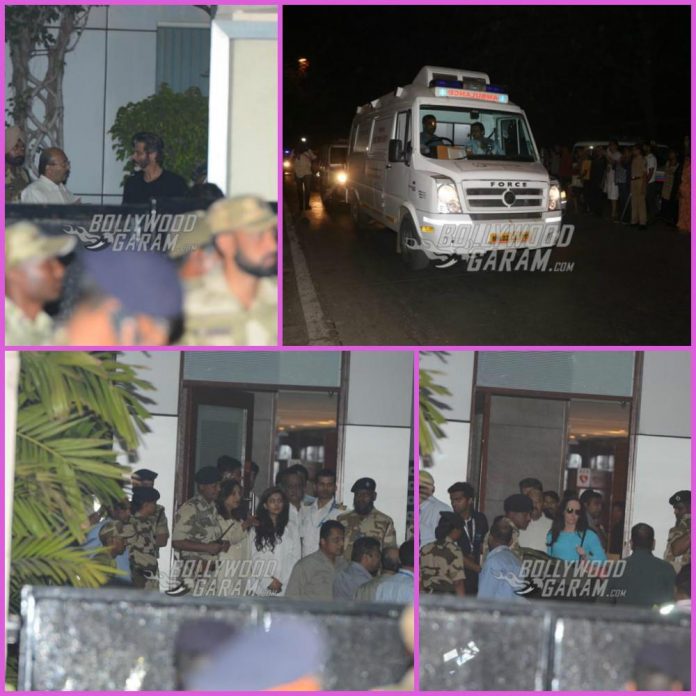 Sridevi’s mortal remains landed in Mumbai around 10 pm on February 27, 2018. Producer Boney Kapoor, Sanjay Kapoor and Arjun Kapoor brought the body of Sridevi back to Mumbai from Dubai after a clearance from the Dubai Police. The body of the veteran actress was brought home in an ambulance under tight security.

High security arrangements were made at the airport as well as Boney Kapoor’s residence. The funeral of Sridevi is expected to be held in the afternoon on February 28, 2018.

The Kapoor family released an official statement stating, “Khushi, Janhvi, Boney Kapoor and the entire Kapoor and Ayyappan families are deeply bereaved and shocked with the untimely loss of Sridevi Kapoor. Late Sridevi Kapoor passed away in Dubai, UAE,onSaturday February 24th. We thank the film fraternity, media, fans of late Sridevi Kapoor and all the well-wishers for their prayers, support and sensitivity during our moment of immense grief. We request you to kindly join us in paying our last respect to a remarkable actor, beloved wife and a loving mother.”

The actress was found motionless in the bathtub of a hotel in Dubai on February 24, 2018.