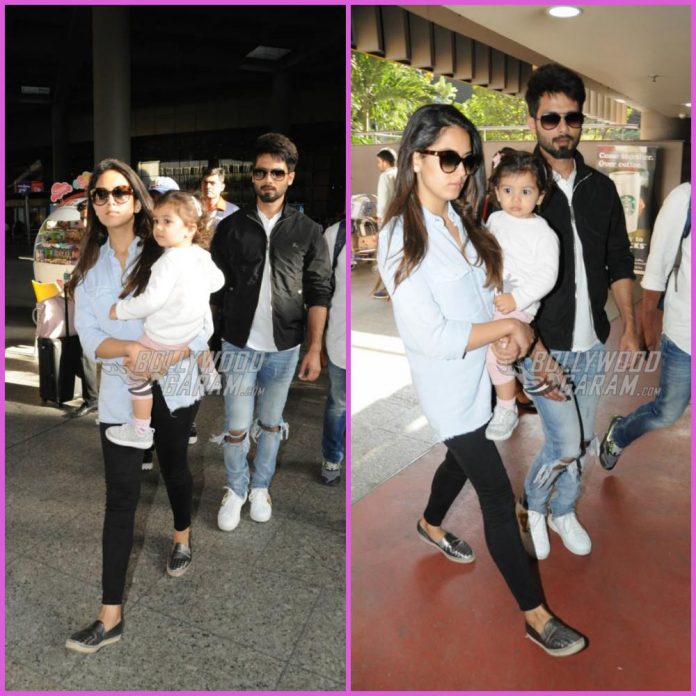 Shahid Kapoor is currently shooting for the upcoming film Batti Gul Meter Chalu. After wrapping the second schedule of the film, the actor took a short vacation with wife Mira Rajput and daughter Misha Kapoor at Dehradun. The adorable family was snapped at the Mumbai airport as they returned from their short getaway on March 21, 2018.

Shahid looked cool in a white t-shirt with blue ripped denims with a black jacket and white sneakers. Mira too made a stylish appearance at the airport in a sky baby blue top and black pants. Little Misha was comfortably nested in Mira’s arms and looked adorable in a white sweatshirt and pink pants.

Shahid in his recent interviews was all praises for his wife Mira, who constantly stood by him during testing times. The Jab We Met actor in a recent interview was all praises for wife Mira and said, “Our marriage has been a huge journey for Mira and me. The two of us come from very different backgrounds. And we went through our own struggle because she had a complicated pregnancy. It was then that we formed a bond and fell completely in love because we only had each other. Misha was our first big project together. Somewhere, subliminally all that I was facing in real life has played its part in Padmaavat.”

Shahid Kapoor will be seen with Yami Gautam and Shraddha Kapoor. The cast and crew have successfully completed the second schedule of the film which is directed by Shree Narayan Singh and is expected to be released August 31, 2018.