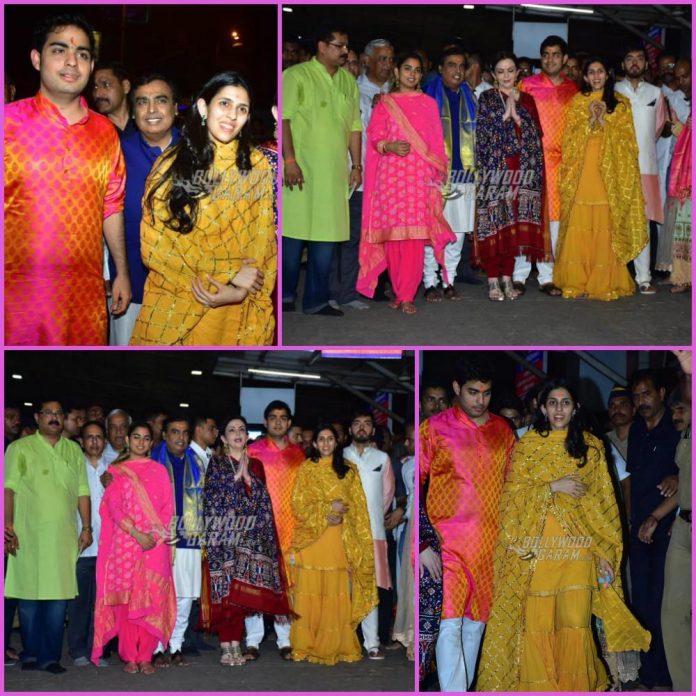 Industrialist Mukesh Ambani and Nita Ambani’s eldest son Akash Ambani proposed Shloka Mehta in Goa on March 24, 2018. A grand pre-engagement bash was thrown for the couple , who will be getting married in December 2018. Before the wedding a formal engagement ceremony will be held in June, 2018. The Ambani family returned to Mumbai and was snapped at the popular Siddhivinayak temple in Mumbai on March 25, 2018.

Mukesh Ambani, Nita Ambani along with children Isha, Anant and Akash Ambani were snapped seeking blessings at the temple. Akash’s fiancé, Shloka Mehta also accompanied the family at the temple. Akash in a recent interview talked about his fiancé Shloka and said, “I am truly happy that our friendship has blossomed into love and Shloka and I are getting married, She is a truly special and extremely kind-hearted person.”

On the other hand Shloka too was all praises for her fiancé Akash and said, “Despite years and busy schedules, we have always found ways to stay connected. Akash is incredibly grounded and we share a bond based on meaning and memories. We don’t just get along – we also support each other’s hopes and aspirations and are determined to build a sense of purpose into our lives together. We are lucky to have a love that began from being best friends and luckier still to have such supportive families”. Akash’s fiancé Shloka is the daughter of Russell Mehta, the head of Rosy Blue Diamonds. The Ambani family and Mehta family have known each other since years .

Akash and Shloka have studied together at the Dhirubhai Ambani International School.