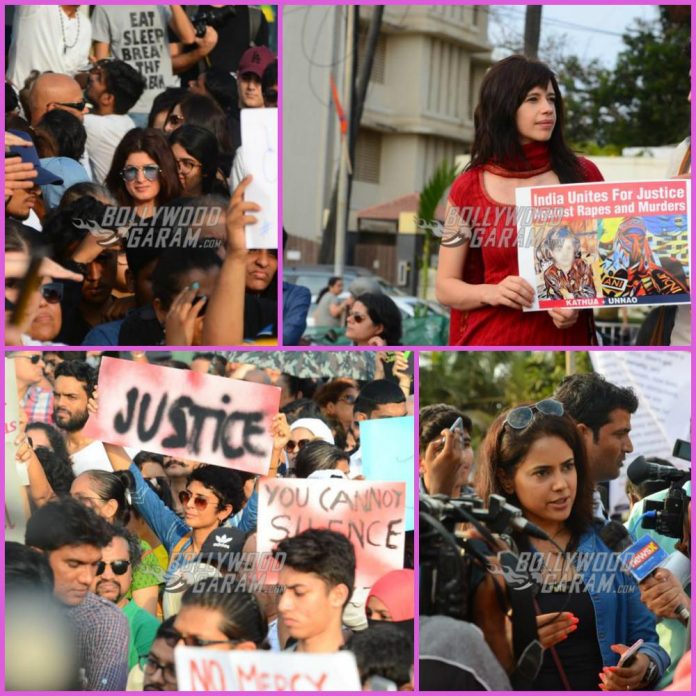 Celebrities from Bollywood gathered along with thousands of People in Mumbai for a peaceful protest against the inhumane rape of an eight year old girl from Kathua in Jammu and Kashmir and sexual assault of another girl in Unnao in Uttar Pradesh on April 15, 2018.The celebrities who were a part of the protests included Twinkle Khanna, Rajkummar Rao, Akshay Kumar, Kalki Koechlin, Patralekha, Helen, Kiran Rao and others.

Other attendees of the protest included Akshay Kumar’s son Aarav, Sameera Reddy, Tara Sharma, Vishal Dadlani, Aditi Rao Hydari, Sona Mohapatra, Anushka Manchanda, and others. The celebrities were snapped on the streets of Bandra to protest against the Barbaric rape and seek justice. Many protestors held banners against the incident. Some of them read, “This is not just rape, this is genocide with state support. Before having a Swachh Bharat, we want a safe Bharat”.

While other celebrities who could not join the protest posted videos in which they are seen holding placards asking for justice for the eight year old girl, who was kidnapped, sedated, starved, gang-raped and murdered at Kathua district of Jammu and Kashmir.