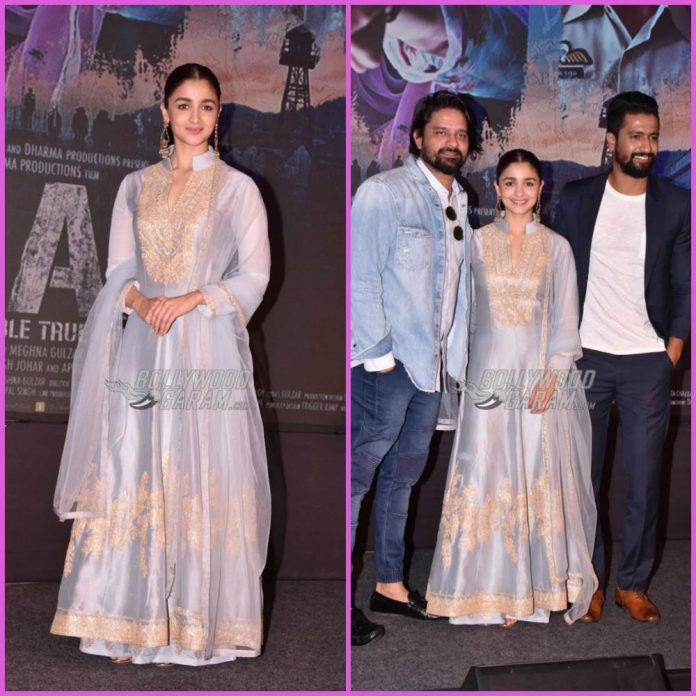 Alia Bhatt, Vicky Kaushal and Meghna Gulzar launched the song Ae Watan, from their upcoming film Raazi at a grand event in Mumbai on April 18, 2018. Bhatt looked gorgeous in a silver ethnic outfit and looked excited and happy at the event.

The actress , who plays the role of an Indian spy called Sehmat, also crooned a few lines from the song at the launch event. The song is sung by Arijit Singh, composed by Shankar-Ehsaan-Loy and penned by Gulzar. The film also stars Rajit Kapoor, Shishir Sharma and Jaideep Ahlawat and will be released in theaters on May 11, 2018.

Alia who plays the role of Sehmat talked about her role and said, “For me, the best part is that this character is not a Lara Croft. She’s a young, naive girl, who decides to risk her life for her country. This was the most beautiful aspect, because I didn’t have to enact anything. Being brave doesn’t mean that you don’t get scared. The sequences were overwhelming, but I wasn’t afraid of holding on and going all the way. A lot of technical preparation went into playing Sehmat.”

Raazi is based on the novel Calling Sehmat by Harinder Sikka.