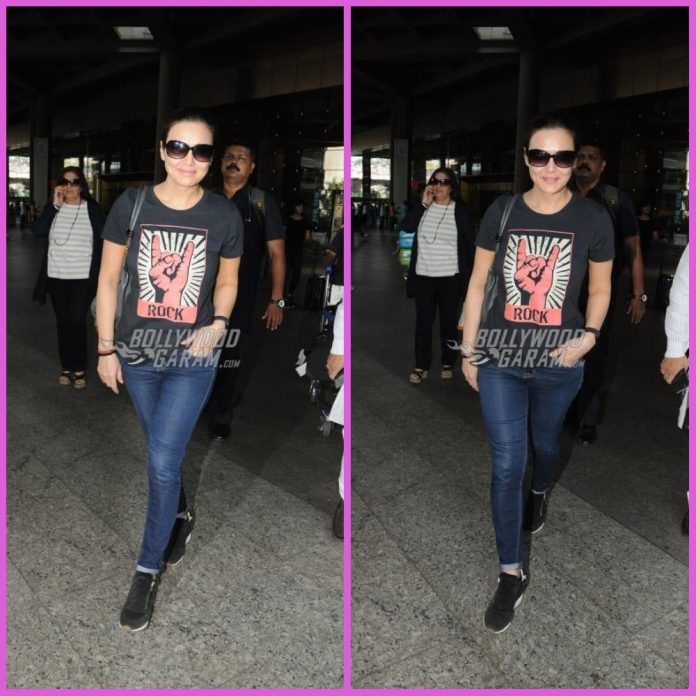 Owner of IPL team Kings XI Punjab, Preity Zinta was snapped at the Mumbai airport on April 20,2018. The actress, was snapped in casuals in a black t-shirt and a pair of denims with her hair tied in a rough bun.

Since the season of IPL is on, the Soldier actress makes sure that she does not miss a single match. Preity was all smiles for the paparazzi as she made her way out of the airport.

On the personal front, the actress got married to beau Gene Goodenough in a private ceremony in Los Angeles on February 29, 2016. Her wedding with Goodenough was a well kept secret and the two have already completed two years of marital bliss. On the occasion, Zinta posted, “A lover, a partner, a husband, a best friend. I can’t believe that I have all rolled into one! Thank You for always being so wonderful & yes You’re the only one I want to annoy for the rest of my life #Happyweddinganniversary #7yearsstrong#love #happiness #hubby #Ting.’’

The actress recently opened up about how she met her husband to which she said that she met Gene at Santa Monica in Los Angeles six years back and dated for five years before they got married.