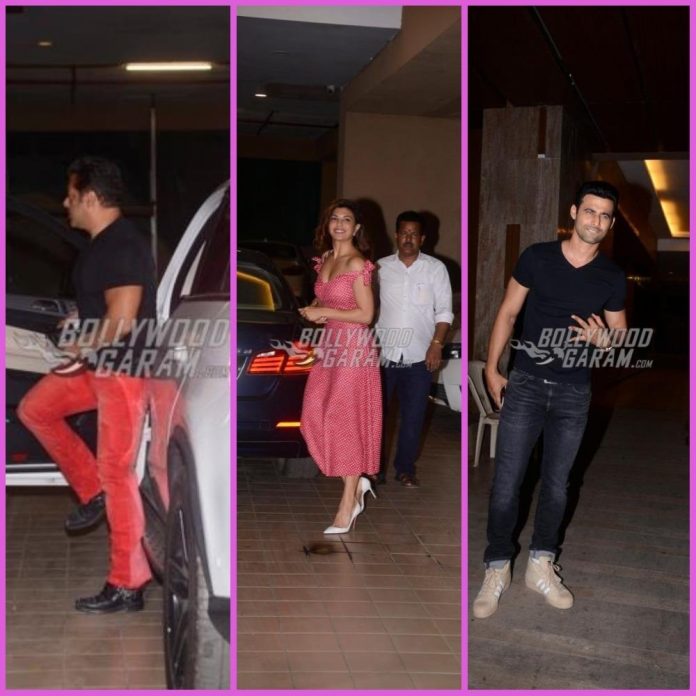 After launching the official trailer of the film Race 3 at a grand event, producer Ramesh Taurani threw a bash for the cast and crew of the film at his residence in Mumbai on May 15, 2018. The attendees of the event included Salman Khan, Jacqueline Fernandez, Freddy Daruwala and others.

Jacqueline looked pretty in a red and white polka dotted off-shoulder outfit while Salman was seen in a trendy black shirt and red pants with black shoes. Freddy was all poses for the cameras in a black t-shirt and black pair of denims.

Salman at the trailer launch event, opened up about how he became a part of the Race 3 cast and said, “Like the kind of film used to happen earlier, this film is like that. This film has a vibe that earlier Bachchan Saab, Dharmendraji used to do. I heard the script of the film two years ago. After that Ramesh Taurani wanted me to listen to the improved script again. It was a difficult genre for me to do, I wanted few changes. I knew the genre of the film but I did not know where I will fit in the genre.”

Race 3 also stars Daisy Shah, Saqib Saleem and Anil Kapoor and will be released in theatres on June 15, 2018.