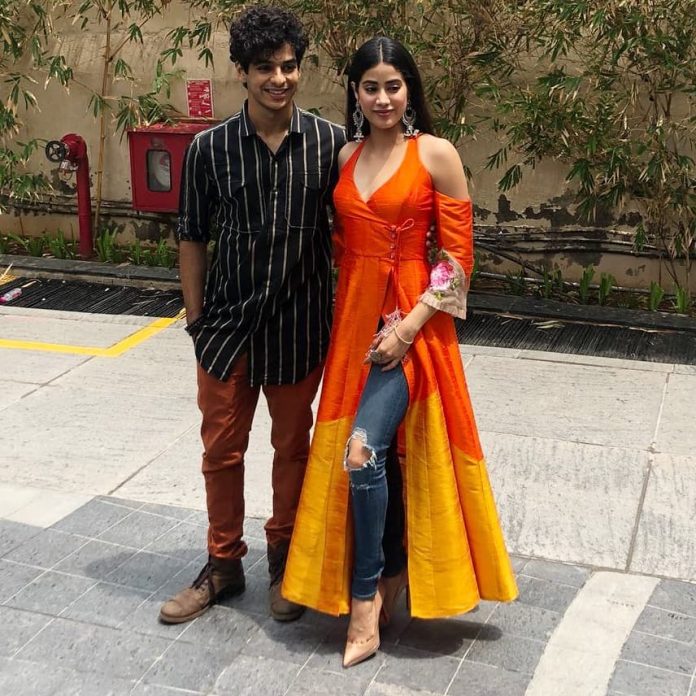 Ishaan Khatter and Janhvi Kapoor have reached the city of Ahmedabad in Gujarat for promotions of Dhadak. The star kids are leaving no stone unturned in promotions.

Janhvi looked gorgeous in an orange and yellow angarkha maxi outfit with a front slit and ankle length denims while Ishaan was seen in a black and white striped shirt and brown pants. Ishaan and Janhvi have been showing off some great chemistry together during promotions and the audience cannot wait to catch the actual film.

Dhadak is the Hindi remake of the Marathi blockbuster Sairat and hence the audience has a lot of expectations from the flick. Ishaan while talking about his equation with Janhvi said that they were like Tom and Jerry on the sets and had a great time working together.

Dhadak is directed by Shashank Khaitan and a few songs released from the makers have received a mixed response from the audience. The trailer of the film has got a great response from the audience. The song Zingaat has a Hindi version for Dhadak and is revamped by the composers Ajay-Atul. Zingaat song stars Janhvi and Ishaan at their best and the song is choreographed by Farah Khan. The film is ready to be released in theatres on July 20, 2018.