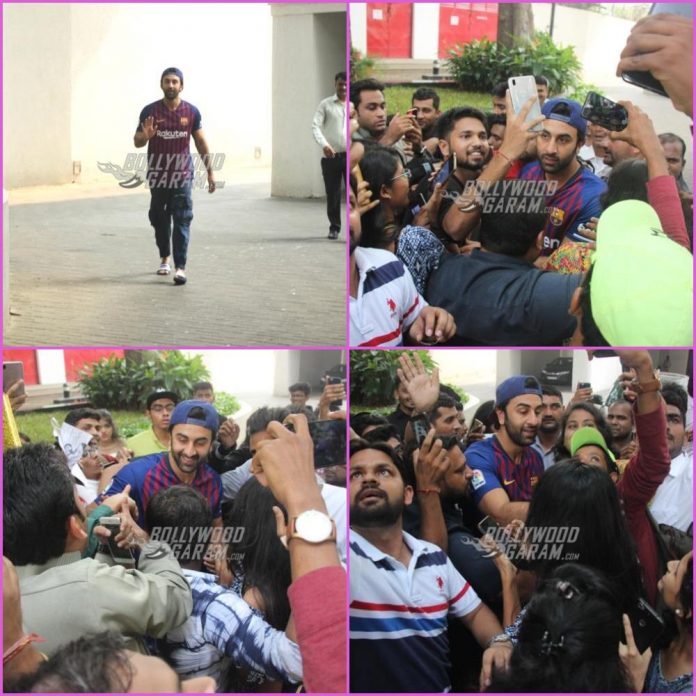 Fans of the young Bollywood star Ranbir Kapoor flocked outside his residence in Mumbai to celebrate his birthday on September 28, 2018. The Barfi star has turned 36 year old and the actor was seen interacting with his fans with the star.

Just a day before his birthday, Ranbir had a great time with his friends from the industry. The Sanju star had invited, Shah Rukh Khan, Karan Johar, Deepika Padukone, Ranveer Singh and Alia Bhatt at his residence and had a great time together. Producer Karan had also shared a group picture with everyone on his Instagram account.

The picture shared by Karan had become viral as the fans were surprised to see Shah Rukh, Aamir, Alia, Deepika and Ranbir in a single frame. Ranbir’s rumoured girlfriend Alia Bhatt had also shared a picture of Ranbir and captioned it, “Happy Birthday Sunshine”. Ranbir had come out of his residence and greeted his admirers. The actor even posed for selfies with his fans and gave away autographs.

The Rockstar actor looked dapper in a FC Barcelona football jersey and navy blue pants. Kapoor was last seen in the film Sanju which was a biopic on the life of Sanjay Dutt and is currently shooting for the upcoming flick Brahmastra.